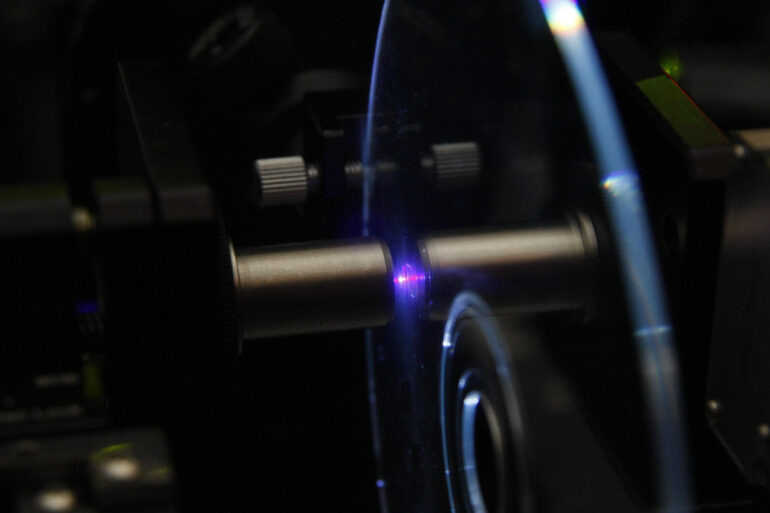 Amongst the many changes that the age of digitisation has brought in, one conspicuous change is in the amounts of relevant data generated by individuals and enterprises. While storage space on our devices has grown, it hasn’t matched the pace of increasing space required by our files and data. All of this is being encountered on a personal level – imagine the monstrous amounts of data enterprises are dealing with on a global scale. With this rapidly increasing information, comes to need to store, manage and use it efficiently and quickly. So what is the world doing about this?

What is conventionally used today are two-dimensional memory technologies that we see in the form of magnetic hard disk drives, optical disks and semiconductor memories. With rapidly falling costs of development, we’ve managed to have higher capacity devices at pretty affordably prices. But if we extrapolate the need for space and speed of memories required in the future as per the ongoing trend, two-dimensional memories might fail to pass owing to the drawbacks like thermal stability of bits, wavelength of light, size of hardware, so on and so forth.

To keep pace with the demand and to supply efficiency, we could resort to new-generation data storages where in data is stored in three-dimensional setups. One of the most potential technologies in this subject are the Holographic Digital Data Storage mediums.

A hologram is a recording of the optical interference pattern formed at the interaction of two coherent light beams. Holography is the technique driven by the wave nature of light that is used to design holograms. The nature of optical waves allows the designers to use the interference between the two waves; the object beam and the coherent background. So far Holography has only been used on small scales in very parochial applications, such as on driver’s licenses or paper currency. To extend this, research is being carried on by a large number of research organizations, commercial setups dealing with data management and defence consortiums.

The Science Behind Holography 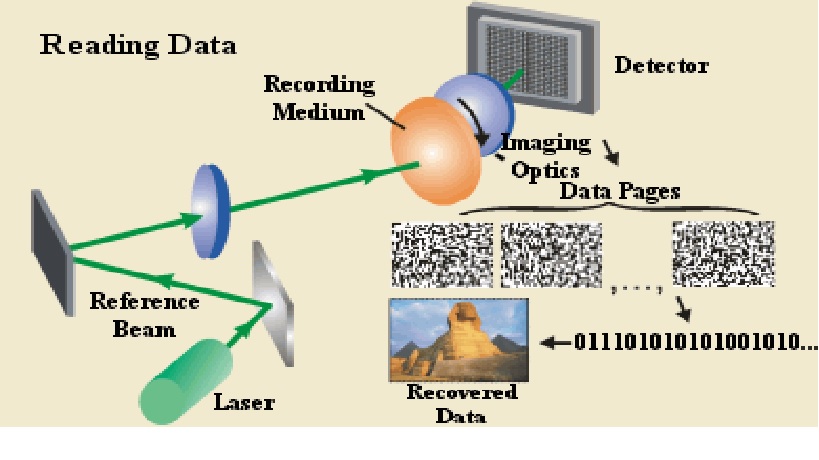 Holographic memories function on the basis storing a sequence of discrete data snapshots within the thickness of the media. Since holograms can be recorded within the volume of the material, the thickness of the medium can contribute to a slight difference in the process involved. Before that, we need to know how the basic processes behind writing data onto a photographic film, that stores data in the form of 3D images, and reading the data from it. The basic process of writing takes a single Laser light source initially. Light from a single laser beam is then split into two beams: the signal beam and the reference beam. The signal beam carries the data to be written, while the reference beam illuminates the target region. The reference beam hence keeps track of where the data is being recorded. Encoding the data onto the signal beam employs a device called the Signal Light Modulator (SLM), which acts as a shutter system. It blocks the light at points corresponding to the bit 0 in the digital data and lets light pass through at the point of existence of a bit 1. The SLM hence translates the electronic data in the binary format, to an optical checker-board pattern of illuminated and darkened pixels. 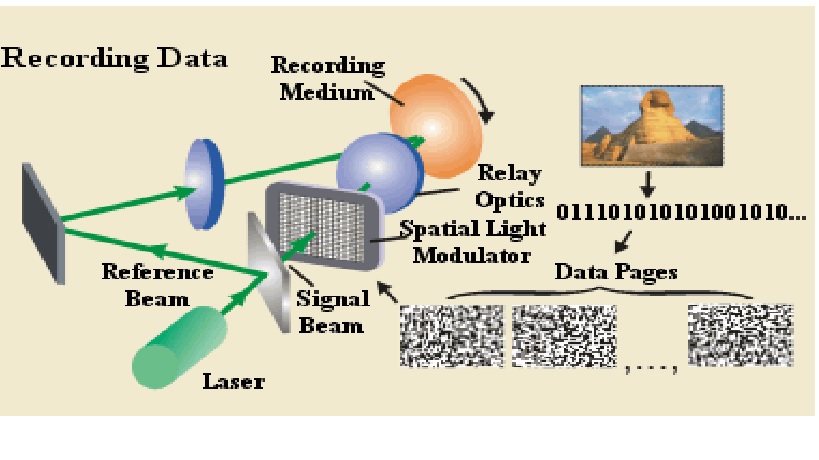 This data is arranged in a page of around 1 million bits. The reference beam is finally reflected to impinge on the data-carrying beam within the light-sensitive storage surface at the point of intersection of the two beams. A consequent chemical reaction in the medium, caused due to optical interference leads to the hologram being stored. Like any other 2D storage medium, Holographic Data Storage Systems (HDSS) can also be classified as WORM (write-once-read-many) media that is based on irreversible photochemical reactions or rewritable media, which uses the photo-refractive effect in optical crystals. By varying the angle of incidence of the reference-beam, wavelength or position of the light-sensitive medium, a multitude of holograms can be recorded in the same volume of material. This also enables one to save several hundred pages of data, each characterized by an individual unique address, in the same location of the medium.

For reading the data recorded in the 3D hologram, one only needs the reference beam. The interference pattern stored in the holographic image is illuminated by the reference beam (the same which was used for recording the data). The incident beam is so diffracted to reconstruct the data beam. By the principle of backward-propagation of the reference beam the image pattern is illuminated from the back side and as a result, the reconstructed object beam traverses backward to its original source. As this reconstructed signal wave is imaged onto a detector, all 1 million data bits are read in parallel. 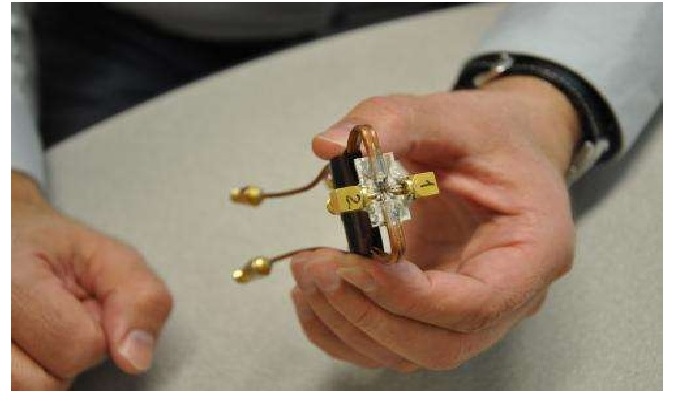 Although the process so described does make the technology sound like the cusp of memory-storage renaissance, we still should look deeper into the pros and cons of this technology. 3D Holographic storage is not a novice when it comes to innovative technological ideas. The concept was first proposed by Polaroid scientist Pieter J. van Heerden in the early 1960s. What hindered the growth and popularization of the proposal was it being esoteric and maybe, too ambitious. Attempts were again made a decade later, wherein Micro Computer Corporation, Austin and Stanford University ventured out to build a complete HDSS, with the argument that the low disk access rate to find information on the hard drive was impairing digital efficiencies. Despite the history of repeated attempts and great failures, InPhase Technologies, a technology development company set in Colorado, made claims of revolutionizing how we store our data. Hopes were high as there was an actual successful holographic storage prototype at the NAB show in 2005. This was then followed by complete silence on the subject and no further kerfuffle.

With research and development worth $100 million lasting for 10 long years, commercial feasibility of the idea was still far off.

Results are still inconclusive, though we have extensive research going on in Bell Labs and many other research institutions. The technology though has a large number of advantages that could convince one of its viability. Since the information can be stored at multiple depths by just tweaking a few parameters, it increases the storage density without any added costs. Moreover, the speed of HDSS is higher as compared to conventional disks, from where the data is read linearly. HDSS reads the data bits in a parallel fashion thus increasing the speed manifold. Data transfer rates will thus be high and this might lead to negligible loss of important data, which is a nagging fear in case of extant 2D memory storage technologies. Longevity is another issue that can be tackled by HDSS. Holographic media is said to have a lifespan of over 50 years, as compared to around 5 years for magnetic storage.

Although the technology boasts of revolutionary changes in the data-storage industry, a few more than one Achilles’ heels have always let it down in the past endeavors. We could only hope that if it shows up next time, it stays in the market for keeps.