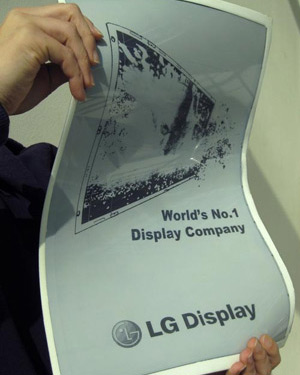 The amount of research in the field of electronics ongoing in every nook and corner of the world is impressive, sometimes intimidating. One such arena of electronics has been display devices. Under constant scrutiny and rigorous development, display technologies have come a long way from electro mechanical systems used to display text, up to all-electronic devices that are capable of full-motion 3D color graphic displays. But now, we’re on the verge of a big leap.

E-paper is an elusive yet fascinating industry. It has prevailed for quite a few decades now but hasn’t really captured the market as it should have. Why not?

Related: How Do eWriters Work? 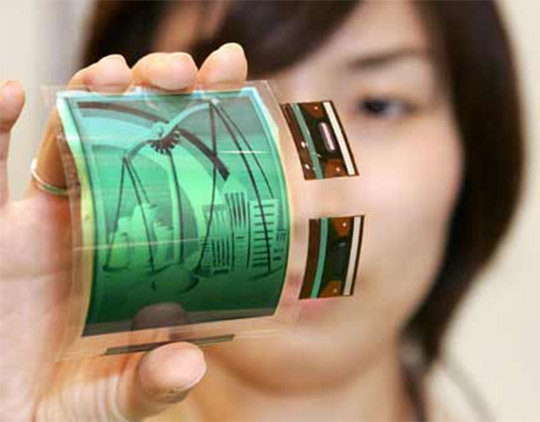 Also read: Technology we’re looking forward to in the future

E-Paper is a logical leap forward

If you’re still subscribed to newspapers or hard copies of magazines, huge piles of local and national dailies that collect at your place at the end of every month would be a familiar sight. Or the daunting piles of files and paper work sitting on the desk of your office clerk? The world is changing to digital text rapidly, but that doesn’t truly replace the ‘feel’ of paper we’re so familiar with.

E-paper aims to imitate and substitute the conventional paper and yet cut down on the waste produced by conventional paper derived from processed wood-pulp. The next question that arises is if we really need this when we have apps on our smartphones and tablets that allow us to read anything from newspapers to novels on the move. There has to be a compelling reason for the dominance and preference given to a 22-century old invention over all the impressive developments springing up in the market. Conventional paper has a list of features that give it an upper hand and hence make it a persistent favourite amongst the masses.

It is flexible, light, foldable (and of course roll-able) and portable. Besides it costs a fraction of your latest smartphone. It’s got good contrast and has high and even reflectivity. Ever noticed how it can be read from a wide range of angles unlike other digital display surfaces? Furthermore it can be preserved for ages to come and if the list wasn’t long enough, it needs no batteries or power supplies to run. Out of all these factors, the one that appeals to the readers the most is how there is an even contrast and high reflectivity that is characteristic to traditional paper surfaces. 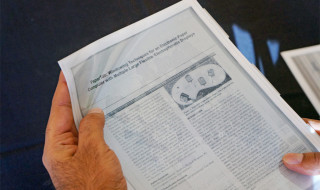 The need for replication of these features highly catalyzed the invention and development of e-paper technology that reflects the light falling on it unlike a convectional flat panel display, which uses a backlight to illuminate its pixels. This also implies low power consumption as E-paper only uses power to update the display and no power is drawn to retain the image or text on screen for an indefinite period of time. This ultra-low power consuming display technology can be rolled and folded just like conventional paper and can be ported along anywhere. E-paper is thus a display with all the reflective qualities of paper, but one that could be updated electronically. Imagine a palm sized sheet of this material that could hold millions of pages in a tiny chip and could bring the library at your doorstep.

But how close to commercial mainstream availability are we? Some background first.

E-paper essentially comprises two different components, the upper surface being the electronic ink, also called the ‘frontplane’, while the obverse is the electronics required to generate the pattern of text and images on the E-ink page, called the ‘backplane’. While the backplane is an intricate network thin-film –transistor matrices, the advancements have strived to improve the efficiency of the front planes.

The first version of e-paper was developed as early as 4 decades ago, in the 1970s by Nick Sheridon at Xerox, Palo Research Centre. It was called Gyricon and consisted of polyethylene spheres sized between 75 and 106 micrometers across. Each sphere was a particle composed of negatively charged black plastic on one side and positively charged white plastic on the other. These spheres are then embedded in a transparent silicon sheet, with each sphere enveloped in a bubble of oil to facilitate free rotation of the spheres. The polarity of the voltage applied to the electrodes would determine the side of the sphere facing-up thus giving the pixel a white or black appearance. The next electrical impulse would re-align these spheres according to the new content to be displayed. This was the Bichromal front plane technology of electronic ink. 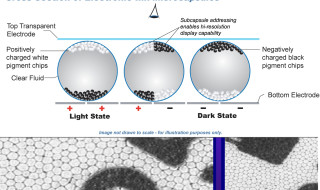 Around 20 years later, Joseph Jacobson founded the company E-ink. He intended to develop an electronic paper running on the principle of electronically loaded balls turning under influence of tension and therefore showing either a black or white side. Instead of Gyricon technology where electric current would rotate individual color spheres in a film, here the change in the electric charge would rotate small electronically loaded white particles that were dissolved in a dark colored oil, all enclosed in microcapsules. This paved way for the development of active matrix e-paper display and the electrophoretic e-paper display. This is the most widely used technology in e-paper displays as of now. 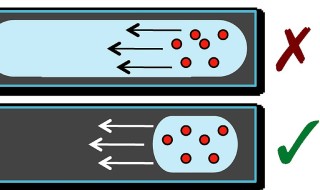 You didn’t expect e-paper to be perfect, did you? There’s always that one disadvantage, perhaps even a deal-breaker to many. Existing electrophoretic displays have a list of disadvantages.

How Well Do Antivirus Apps Protect Your Smartphone?

Low Refresh Rate – One of the main challenges faced is the very low refresh rate compared to other low-power display technologies like liquid crystal displays. This disallows the implementation of sophisticated interactive user-end applications like fast moving menus, mouse pointers or scrolling that is possible on other handheld computers.

Ghosting – Another limitation is that an imprint of a previously displayed page may be visible even after refreshing parts of the screen. Those imprints are termed as ghost images, and the effect so described is technically known as “ghosting”. A relatively newer development called electro-fluidic display, uses voltage to manipulate colored ink in a way that facilitates the dielectric liquid medium to move along with the particles thus allowing better speed of display generation. But it is still in the laboratory-experimental phase and is yet to make big. The advent of this technology might help us overcome these limitations.

Animations & Color Limitations: So far, E-paper cannot support animation, reducing its scope in industries like advertising or media. If you’re looking for a physical newspaper replacement, you may wonder why we need this at all. But in typical human fashion, if there’s potential, we’re going to want it.

Moreover, owing to the electrophoretic technology being implemented now, these displays have the ability to exhibit only two colours, predominantly light (white) and dark (black) tones. Incorporation of any further pigments shall allow only one-third of the display reflecting light thus reducing visibility. These short comings are being worked on and claims have been made about a bright future for the electronic paper technology. 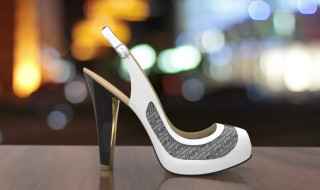 E-Paper Technology is Already Out

In March 2010, leading watch manufacturer Seiko released a second generation of its famous E-ink watch with an active matrix display, which was an improved version of its 2005 electrophoretic display watch. The Volvorii Timeless smart shoe employs the e-paper technology for its design and structure, and comes from a startup, Ishuu Technologies, based in Beijing and Lithuania. Now imagine having to buy just one shoe and being able to program it to look different and complimentary to each of your outfits. Isn’t that convenient?

In January 2007, the Dutch specialist in E-paper, Edupaper started a pilot project in a secondary school in Maastricht. They used E-paper as digital school books to reduce costs and students daily burden of books. The Yotaphone, a smartphone maker launched a series of dual display smart phones employing the e-paper technology for its back-panel display. While the front panel is like any other smartphone screen, the back panel can be used as a e-reader or display always-on app notifications, time or maybe the weather. 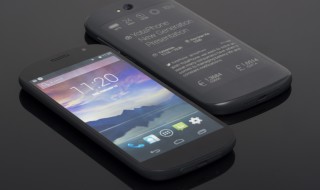 There’s obviously huge potential for e-paper to take the market by storm. A team of Japanese researchers has now taken the Gyricon technology and updated it to make a tough and inexpensive display that could be used like a whiteboard when a large writing space is required. To be able to write on e-paper would be another milestone covered. With time to come, foldable electronic displays might claim huge success owing to the sustainable-development they can effectively cause.