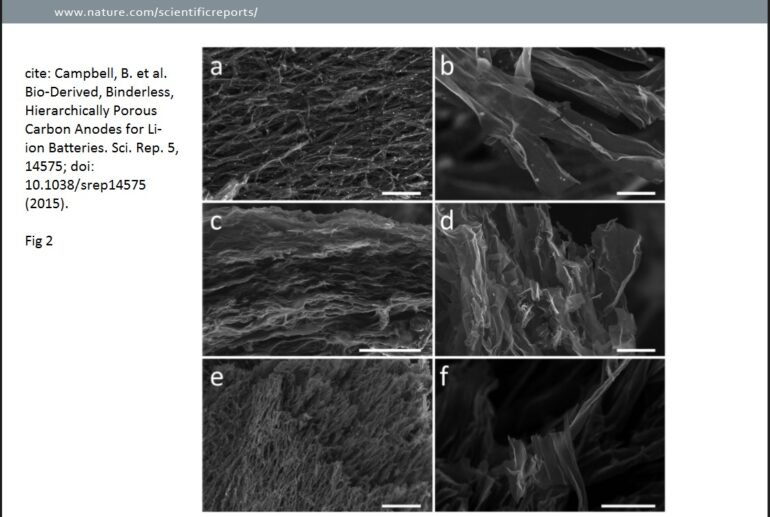 Technological advancements have moved from being revolutionary to incremental. Many people aren’t happy with that. But it’s not surprising to expect that the frequency of revolutionary changes in the world will reduce with time, moving on to incremental benefits.

Right from the mid 20th century, the evolution of technology has been predominantly based on synthetic materials. Though one cannot deny the usefulness of these synthetic materials, hazardous wastes generated in the process have been posing a serious challenge for the planet. In addition to making the world a lot more connected and progressive, things like smartphones and PCs have also added immensely to electronic waste. Now, engineers have begun working on this other problem. They’re coming up with bio batteries. This post will deal with a battery created from Portobello Mushroom by a research group of California University, Riverside.

If you were to open your smartphone or tablet, you’ll will find a heavy Li-ion battery which charges your device – and also happens to be its heaviest component. The current industry standard for rechargeable Li-ion battery anodes is synthetic graphite. Though graphite has its own advantage of high cycling stability and low hysteresis, it has drawbacks –  it is relatively expensive, and has low storage capacity per carbon weight. Ever wondered how processors seem to get faster despite shrinking in size, while batteries continue to have a direct correlation between size and capacity?

Alternatives to graphitic carbons for Li-ion anodes are hard carbons and soft carbons, which can be synthesized in a number of ways. A popular way of hard carbon synthesis involves the pyrolysis of sucrose (a natural organic sugar). A recent development in the hydrolysis of glucose has identified a potential maker of bio–batteries where, analogous to how the human body converts food to energy using enzymes, bio-batteries will use enzymes to convert glucose into energy. When glucose first enters the battery, it enters through the anode. At the anode the sugar is broken down, producing both electrons and protons. These electrons and protons now play an important role in creating energy.

In terms of commercializing new forms of carbon for Li-ion batteries, naturally-derived carbon compounds must be explored. Activated carbons are also showing incredible promise for implementation as scalable, commercially-viable Li-ion anodes. Activated carbons are most commonly produced from exposure to a concentrated KOH solution, or other chemical activating agents. KOH treatment generates additional mesopores and/or micropores (which helps in passing Li ions and acts as a channel) after thermal activation; the resulting defects encourage higher capacities by allowing additional lithium insertion into the carbon.

How Portobello Mushrooms can provide Power

I’m going to go ahead and put forth the argument that Portobello Mushrooms can be a successful potential replacement of graphite batteries.

A group of scientists studied the electrochemical performance of pyrolytic carbons derived from the cap skin tissue (CST) of the mature fruiting body of the fungus, (Agaricus bisporus)  colloquially referred to as Portobello Mushrooms, a delicious food item for the gross part of  the world’s population. The study has revealed interesting microstructural features after anoxic carbonization. It also observed remarkably high concentrations of salts after carbonization – which implies that more pores open up over time gradually increasing battery capacity with usage.

Further, PM CSTs were examined after various pyrolysis temperatures (PTs) to compare microstructural and compositional changes with corresponding electrochemical behaviour. The purpose of this method is to observe the true performance of bio-derived structures as battery electrodes (i.e., without binder, conductive additive, etc.), and to examine the characteristics of the resulting pristine carbon. Using SEM (Scanning Electron microscope) study the PM CSTs manifested hierarchical porosity after PT above 900 °C, showing macro, meso, and micropores, illustrated in fig-1. This raised an interesting possibility with this unique material. These PM CST anodes are binder-free, requiring zero polymers or conductive additives, to attain capacities that are comparable to practical graphite-based electrodes. Binder-free Li-ion electrodes are far superior to graphite-based electrodes, due to their higher utilization of total electrode weight as active material, and minimal processing. This then results in batteries with higher energy density, lower cost, and lower environmental impact.

Why Parents Should Be Wary of Free Apps

A thorough structural analysis was carried out on the PM CSTs using SEM, observing pyrolysis-induced morphological transformations at the micro and nano scale. From the micrographs in the second image below, it can be deduced that the common microstructural feature is nanoribbons, with a sometimes wrinkled appearance.

Nanoribbons constitute an extremely thin, secondary electron transparent array of interconnected, branching ribbons with widths of about 10 μ m, lengths of several tens of microns or longer, and a thickness of about 20–100 nm. A key structural difference making 700CSTs (Fig. 2 a,b) distinct from 900CSTs (Fig. 2c,d) and 1100CSTs (Fig. 2e,f) is the presence of round salt pockets. These salt pockets are thought to form during heating, as water escapes and naturally present biological salts aggregate, both within the chitin-based organics, and on the surface. At temperatures above 900 °C, these salt pockets disappear, having exceeded the melting points of most salts present. It should also be noted that, especially in Fig. 2a,e, the nano- ribbons form a network. There is also layering and/or pseudo-layering, as evidenced in Fig. 2c, which shows a lateral view of the layered ribbon networks. Observations were also made on higher-magnification SEM micrographs of the various PM CSTs. As mentioned, biological salts (primarily KCl) organize in pockets of varying sizes, and begin to create additional void space at 700 °C. However, the melting point of KCl is 770 °C, and above this temperature the salts escape the carbon structure more completely. 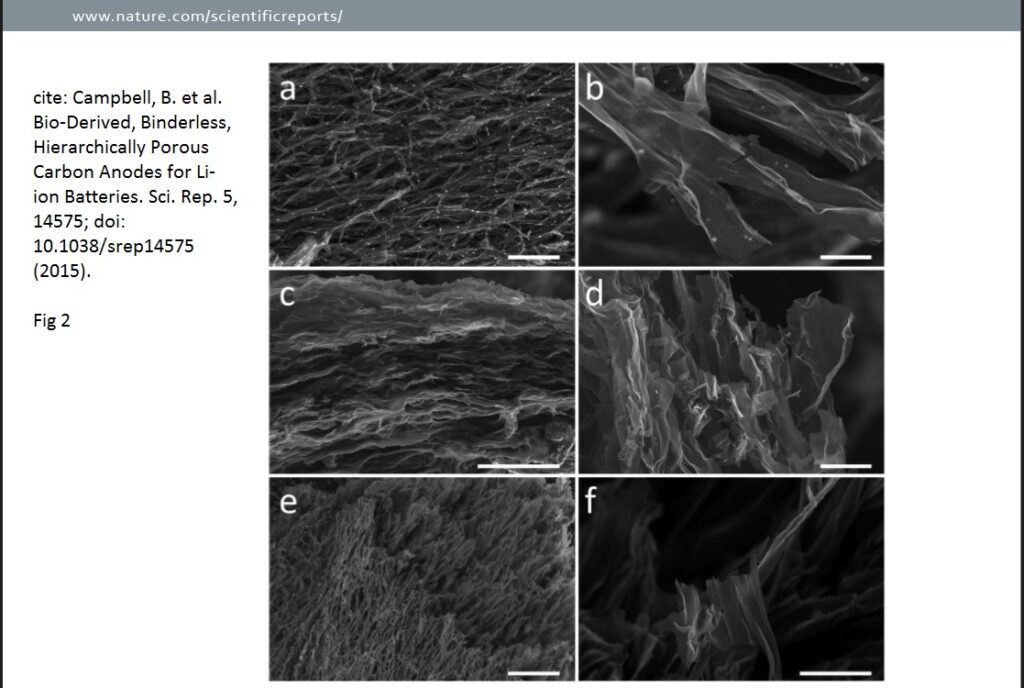 Though the advantages of bio batteries over graphite batteries are plenty, Bio-batteries are yet to be tested on the system, and could probably do with significant improvement in their working efficiency.  Although the mushroom battery experiments have faced steady criticism, the initial success has raised our expectations of having non polluting batteries replace the conventional synthetic batteries and has taken us a step closer to an eco friendly society.