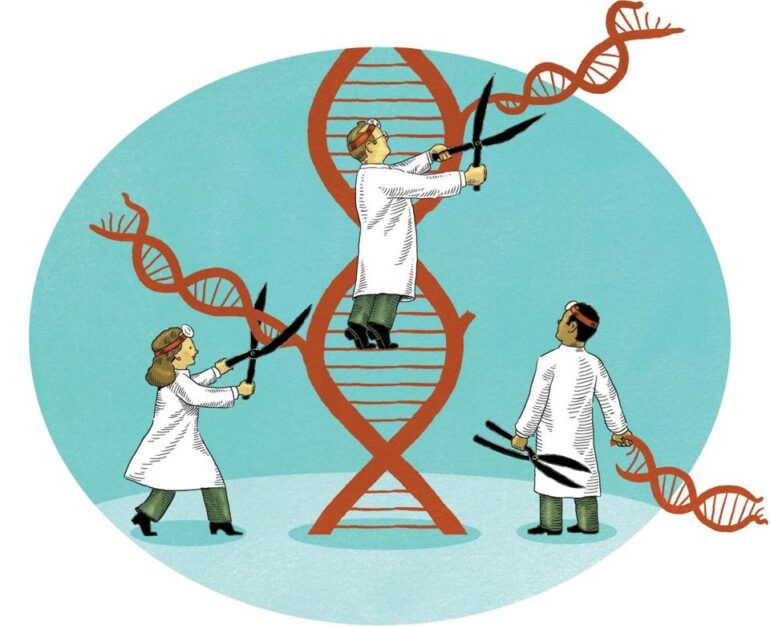 I grew up in a time when families had their own general physicians, who equipped with all the family medical history, were called on to treat every ailment – small and big. This practice gave way to the era of specialists, who had their amazing skill-set that curtailed to a specific organ system or a set of diseases.

But a good doctor – the family one or the tech-savvy specialists, has always used extensive personal medical histories, environment, and lifestyles of each patient to achieve medically brilliant results. So in a way, personalized medicine has been around forever.

But the term taking the medical world by storm right now is Precision Medicine.

Even though theoretically, Precision Medicine is customized healthcare, it differs from conventional practice in the manner data on the individual is gathered. The tools employed for gathering specific information range from genome sequencing for getting specific genetic content for pateints, to high-tech imaging, software and molecular tools for customized molecular analysis. 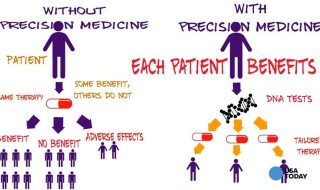 As we differ from one another, so do the diseases that infect us. Even though the causal agent of, say, an infection may be the same, its impact on an individual varies. This is primarily because of our varying genetic make-up which results in immune individuality. Moreover, our lifestyles and habits may have exposed us to different pathogens and such earlier on making us resistant or fight-ready, perhaps more than others around us. Any difference that occurred in our development stage and our essential nutritional variation also reflect in the way we get affected by diseases. There are multiple factors at play here.

In such a scenario, the idea of one-medicine-for-all may seem misplaced. With such staggering variation between individuals, how would the same precisely designed medicines work on all of us? Well, they don’t. That explains the difference in the way we respond, the time required to heal, and the different levels of side-effects. But we get by generally because even if we are so diverse, as well as our pathogens, the research done on them has helped us narrow down the set of conditions we need to tackle them. The major hurdle we face is in diseases that are of multiple origins and affect us more severely and varyingly.

And the list is topped by cancer. Not only is it scary, complicated and an expensive disease to treat, it is essentially our own cells going kaput, which means that any treatment against cancer can potentially harm our other healthy cells too!

This, along with many cons of the traditional medical systems has promoted the idea of precision medicine – wherein cellular, molecular, genetic analysis of an individual is used for his/her treatment.

It is very important to note that precision medicine is not about creating a new drug tailored to that person’s needs. Instead, it involves sophisticated diagnosis to narrow down the specific cause of a problem in that individual, making the treatment hassle-free.

A majority of the work in this field is aimed at cancer treatment, which explains why, when Precision Medicine is ever brought up, it is in the context of Precision Oncology – the study of cancer.

When it comes to cancer, the most often employed tool for precise diagnosis is genetic sequencing of the tumor cell to see how it differs from a healthy cell. This profiling can also help predict if the treatment could possibly have other effects on the patient. All in all, the idea of pinpointing what the genetic problem is and targeting medicines against it is a better approach than the imprecise cocktail of chemotherapy and radiation which harms the patient otherwise.

Another aspect, though not very popular, is using such tools, to predict whether a person is genetically susceptible to some form of cancer and acting on it before cancer strikes.

Since the cancer of one type can have multiple origins, genetic profiling helps determine the cause is in this particular case. Say a cancer is caused by a mutation that creates a product that is promoting unregulated growth. Then the drugs to inhibit the gene product of the malfunctioning gene can be provided. Conversely, if the tumor genetic sequence shows that a mutation has resulted in deletion of some essential gene then probably that gene product can be supplemented externally to curb cancerous growth. This approach is much better than trial and error route which wastes time and money and affects patients most severely. 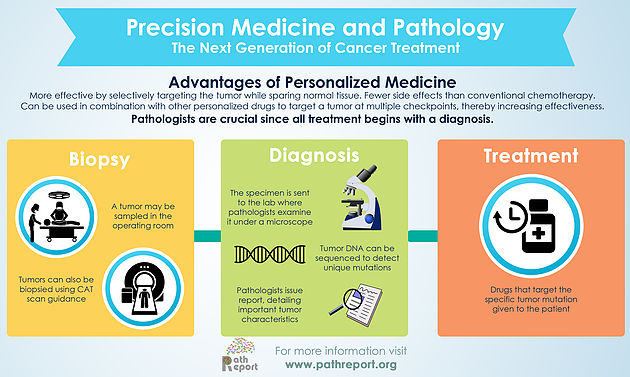 Has it actually worked?

Steve Jobs was among the first people to have the genome of normal and cancer tissue sequenced in order to have targeted actions against the cancer. At that point of time, the process was expensive to the point that it remained available only to a small ultra-rich demographic. Unfortunately, Jobs did not have much to gain from the sequencing. Though not completely validated, it is believed that he died due to a failed immune system. He had a liver transplant in the course of his cancer treatment and had to take immunity depressants for the body to accept the new liver but this diminished immunity may have advanced his death.

Around the time US President announced his initiative promoting the Precision Medicine system, the story of John Moore was taking the internet by storm. Moore’s precise approach to melanoma seemed to be delivering results as his tumors were shrinking. The drugs he took were prescribed accroding to the cancer genome. He did enjoy a whole healthy year, before being told that his cancer had actually spread onto his lungs, and seemed unresponsive to treatment.

Could this all have been prevented if his sequencing had occurred earlier on? Or was the sequencing technique lacking? Worse – is the complexity of cancer beyond the levels precision medicine can overcome?

A flicker of hope has emerged with a little more knowledge on how to interpret and catch the problem fast. In the following months, an oncologist Dr. Lukas Wartman who had been in constant battle against cancer with multiple relapses had his genome sequenced under the advice of Dr. Timothy Ley of George Washington University. With a lot of technical investment, the accusatory gene was found and brought under control.

A Brief History of Time Travel

What ails this medicine system?

This decade started with a mixed bag of results of using the genome sequencing method of diagnosis and research. And we have only stepped forward in developing and fine-tuning of this technology.

The economics of it all is still staggering though. Despite enormous cost reductions, genome sequencing for tailored-medical attention is a far-off dream from most of the populace, and impossible for the third-world patients.

Moreover, the genomics part of it all has become the face of precision medicine. It bodes well to remember that the sequenced genome of a person, say the genome of the tumor cells in a sick person, is just a diagnostic tool, which in the hands of an able, aware doctor can be a master key. It is not a diagnosis on its own.

A tumor cell is atypical and might display multiple anomalies. To deduce what gene product is causing the trouble and how to tackle it is a technique that needs individuals from different fields to work together. It is a medical feat that needs investment from all sectors.

A grand move by the US govt. to promote Precision Medicine came about in the form of greatly funded research plan to garner the genome sequence of around a million volunteers which became a hot topic for people arguing from both sides of the table. One of the (not so) surprising worry that a lot of people have is that the data that is obtained in such a method, specially the genetic data, is sensitive information and the ownership of such a data is going to be tricky to assess. Also, what about the potential misuse of it?

What can be done?

There’s no denying precision medicine has exciting potential we’re going to want to dig out. But some perquisites to that are funding and investments. It will be a futile way forward until the doctors and medical professionals who will deploy this technology are made aware of the essentials, and proper interpretation of the data garnered.

There is an urgent need to assess and peer-review the research that is being done extensively in this field. Huge risks are involved if you consider the complex nature of genes. One of the demons that have to be fought with precision medicine is cancer. But it is not one-for-one disease. There may be several genes involved, in varying degrees, which result in a cancer. It is simplistic and fatal to say that one particular gene is the casual agent and has to be curbed. An error in proper interpretation can result in unwarranted horrors for the patient and so systems for checks and balance is necessary. 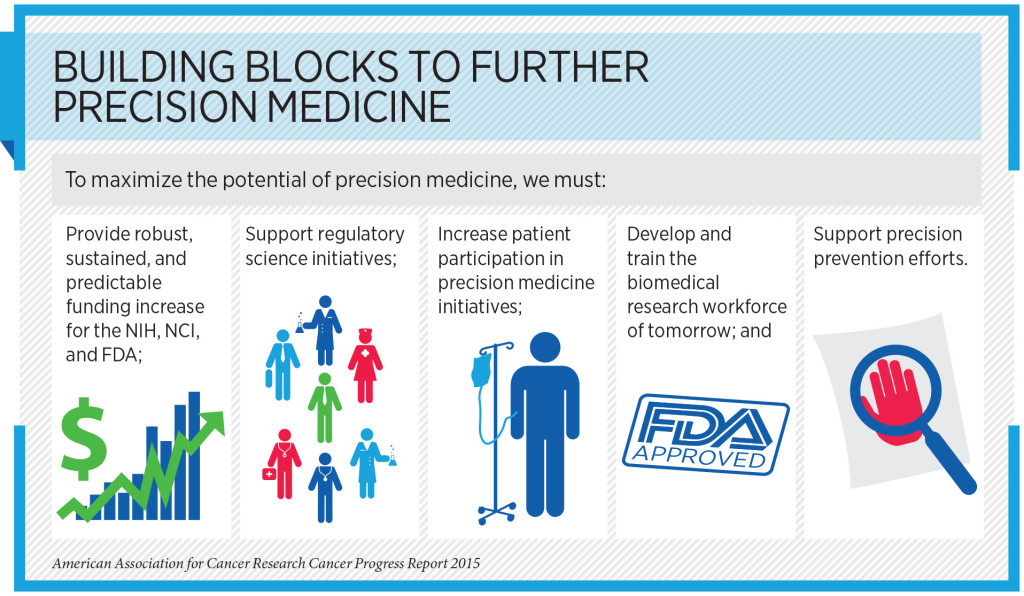 That today we can actually visualize such a treatment plan is an achievement of its own. There is little doubt that continued progress by researchers will deliver sea changes in upcoming medical technology. But like with everything else, it is not without its darker ‘other side’. We can just hope that the human mind which resulted in such a brilliant technology can also bring about its accessibility, efficiency and do away with its unfavorable aspects.