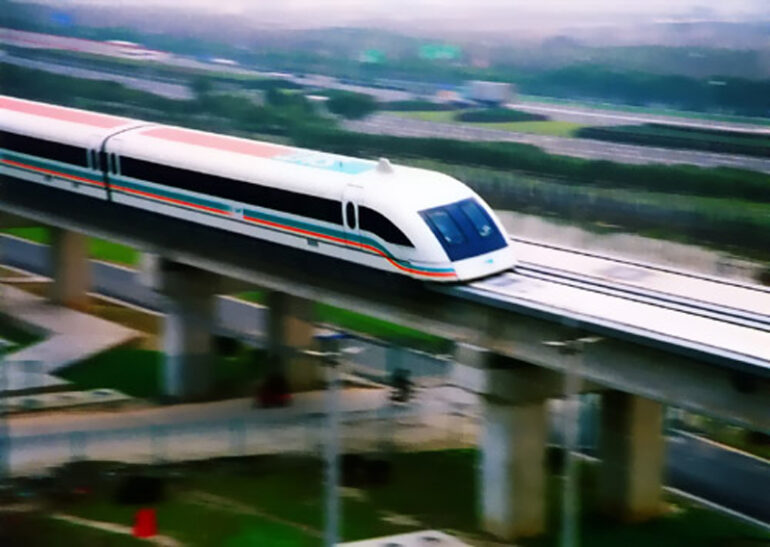 Trains can be fascinating. They’re some really fast ones in multiple cities across the world, they’re used as both short and long distance land transport, and they’re unparalleled if you’re talking about passenger capacity. In countries like China and Japan, they can also be blazingly fast.

There are different types of trains of course – diesel, electric, steam, and now magnetic trains. The Maglev is a magnetic train – short for Magnetic Levitation. Japan, China and South Korea are some of the countries with operational Maglev train technology.

Maglev trains are connected through the tracks through electromagnets. These electromagnets propel the train forward without contact with the tracks. The train essentially levitates. This reduces friction between the train and the track and allows us to achieve far higher speeds on the train. This also allows the train to be a smoother experience for the commuter than the in-contact-with-the-surface trains. Not surprisingly, Maglev trains are quiter too, owing to reduced physical contact between the track and the train.

This also reduces energy consumption as there is less friction to deal with – with most power being utilised to overcome air drag on the trains. Maglev trains hold the record for the highest speed achieved by trains.

The Maglev train’s recorded fastest speed is up to 431 km/hr. It runs around 30.5 km from the Pudong district of Shanghai to Shanghai Pudong International Airport. “If the running speed exceeds 400 kilometers (250 miles) per hour, more than 83 percent of traction energy will wastefully dissipate in air resistance.” wrote Dr Deng Zigang in his paper. From this it seems converting that air resistance into a vacuum and applying it in a Maglev train will be productive.

“The meaning of the project is that it will be the first one to realize the prototype of the future evacuation tube transportation, at this moment, we are conducting evacuation tests on the new system. We will release our achievements after the successful running in the near future.” said Dr Zigang.

Zigang first created a miniature, machine controlled version of the bigger system. Here the maglev vehicle could accelerate to 25 km/hr. After achieving this in February, 2013 an evacuation tube was added for the vacuum to be produced. The vacuum created allowed the maglev train to accelerate from 25 to 50 km/hr. However, this whole thing was a prototype, without involving any passengers and limited to a smaller 6m radius round ring shaped track.

Related: The Hyperloop Will Revolutionise Transporation

The model is fairly similar to Hyperloop – both modes of transport will involve vaccuum chambers to reduce resistance. The Hyerloop, however, will not be making use of magnetic levitation.

Speed after the possibilities of such technologies is not just a jargon used in physics; it has become an emotion of the future. Technology such as this, Evacuated Tube Transport (Although just a patent), Elon Musk’s Hyperloop trains are all going to transport us into a new future. This might help me to have a better and more fun filled train experience now.