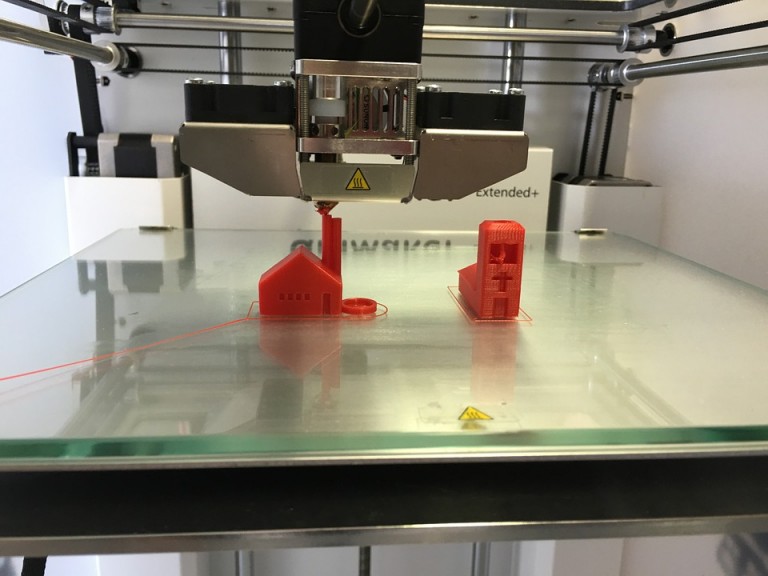 For centuries, engineers and architects have toiled to pitch their design ideas using 2D drawings. However, among the many novel innovations of the 20th century, we now have a viable and efficient way of bringing ideas to life through 3D printing which was first used in 1981 for prototyping. It is the process of manufacturing 3 dimensional solid objects from digital files by laying down successive layers of material.

Today, digital design is deployed to create accurate drawings quickly and manufacture objects with greater precision in photorealistic styles. It has enabled the use of realistic scale models and thereby, the production of complex (functional) shapes using less material than traditional manufacturing methods.

A model is designed digitally using a software which is analogous to a mould. This model is then used to manufacture an item by transmitting the data to a 3D printer. Special scanners can be used to create replicas of real-life objects via 3D printers.

In 3D printing or additive manufacturing, the object is built by adding layer after layer on top of one another. Each layer is a thin horizontal slice. Polyamide is the most commonly used material. It gives a smooth finish to scaled models and creates more realistic objects.

3D printing: The next big thing

3D printing is the invention that will fuel more innovations. 3D printing can complete manufacturing overnight, or within a fairly short period once the design has been made. However, prior to these quick-turn prototyping and production manufacturing processes, manufacturing was a long and costly process which often left no time to re-prototype frequently or make multiple design adjustments. A hand-drawn design was first converted into a model with hand labour and fabrication or by casting a plastic or metal part. This added 2-4 weeks to the project & if there were any design configurations then it could take more than a month.

3D printing offers more design freedom and at minimum cost, since the layering process can reuse the used material. NASA’s Marshall Space Flight Center used 3D printing to consolidate one if its part which had 150+ parts into one continuous unit!

The concept has several applications in aerospace – it can make production directly in micro-gravity or in the vacuum of space a reality. Astronauts can use 3D printers to manufacture broken parts/ replacement parts faster inside their space station. Logistics can be made more efficient by introducing 3D printers in the orbit to solve the difficulties faced in installing big structures on board.

SpaceX and Blue Origin are using 3D printed components in their vehicles. Relativity Space is developing “Stargate”, a 3D-printing system for manufacturing rocket parts faster than ever before.

Archinaut, a Made in Space initiative under NASA will soon launch a 3D printer and robotic manipulator arms in the orbit. It is expected to perform a variety of tasks off-Earth from repairing satellites to building large structures like space telescopes.

AMAZE project (AMAZE for Additive Manufacturing Aiming Towards Zero Waste & Efficient Production of High-Tech Metal Products) by ESA (European Space Agency) is working on a project to allow 3D printing using metal parts resistant to temperatures up to 1000 degrees in the space station. This will eliminate the need to assemble the parts & thereby reduce the cost of transportation. Another futuristic project is the creation of a 3D printing base on the moon.

3D printing could be perfect for manufacturing the urgent operational needs of warfare. Damaged parts can be printed before replacement parts arrive. It can make the supply chain more efficient.

The construction industry is gearing in full speed to build more using 3D printing which is also why the concrete 3D printing market is expected to reach $56.4m by 2021. Constructions-3D, a French company has made a polar 3D printer. It prints whilst inside the construction site through a mechanical base, and a robotic arm with a nozzle for extruding the material at the end. Once the construction is complete, it leaves through the front door of the building.

3D printing can potentially transform the manufacturing sector. Objects made through additive manufacturing can be used to deliver a quality product at a faster pace and cheaper rates. It also reduces the waste generated and can recycle the waste by manufacturing a new product from an old waste product. However, it is not devoid of challenges. The choice of printing material, the difficulty in the calculations of resistance and resistance in time, plants doubts about the strength of these structures. Another challenge lies in combating the misuse of 3D printing, especially in the defence industry. Even though the 3D printing technology is not readily available but with time significant knowledge and craftsmanship barriers have to be set.

3D printing is capable of creating just about anything your mind can conjure up. As the technology matures, new materials and new areas will be explored and the functionality of 3D printed objects will improve. This can create revenue opportunities for manufacturers, improve the supply chain and help them reap benefits at every stage of the value chain.

A Look into the Textile Manufacturing Process

An Intrinsic Perception of The Healthcare 3D Printing Market

The obvious connection between 3D Printing and Space Colonization