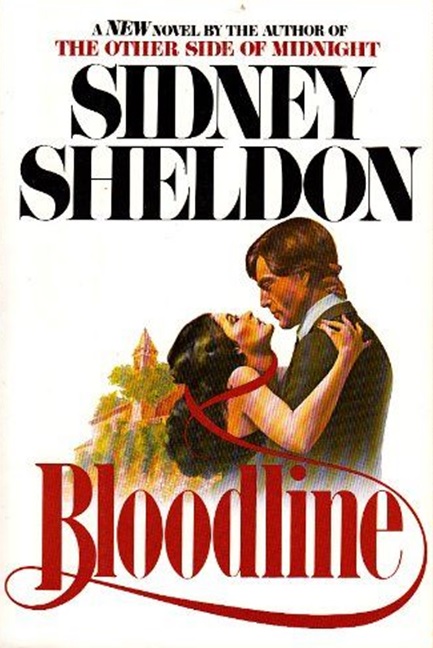 Sheldon is a master of crime fiction and thrillers, with novels having become international best-sellers and read by more than 30 million. A successful chap, no doubt.

Bloodline, a murder mystery book, is another of Sheldon’s novels, released in 1977. Considered to be one of his greatest and finest works, Bloodline will captivate you and keep you glued till the very end. The engaging novel was also adapted into a movie – Sidney Sheldon’s Bloodline, in 1979, and starred Audrey Hepburn, Omar Sharif, and James Mason.

This intriguing and entertaining novel features Elizabeth Roffee, who’s father (Sam Roffee) dies in a mysterious accident, leaving behind his multi-billion dollar business for her to inherit. She befriends her father’s best friend and business partner Rhys Williams, an attractive but mysterious man. The story follows the young and beautiful Elizabeth taking over her father’s pharmaceutical business and struggling to make the it survive. Rhys, who should have been the company’s President, steps back since the position should be held by a member of the Roffee family only, and instead chooses to assist Elizabeth in running the empire. [quote_right] The first few pages of Bloodline hook you and force you to turn the pages and go on [/quote_right]

The first few pages of Bloodline hook you and force you to turn the pages and go on. We are shown Elizabeth’s entire childhood and her transformation from an ugly duckling to a graceful swan, her brief homosexual tryst with her boarding school teacher, her troubled relationship with her father which is indeed very sympathetic.

As the plot progresses, the strong and intelligent Elizabeth soon figures out that her father’s death was no accident and starts the investigation of his murder. Meanwhile her four cousins- Anna from Berlin, Ivo from Paris, Helene from Paris and Alec from London, force her to take the company go public – an idea which Elizabeth turns down. Consequently, the heiress finds herself become the target of an unknown assassin.

A Plot That Keeps You Guessing

Sheldon then slowly reveals how the cousins are in dire need for money, and have their own justification in wanting Elizabeth out of their way.

Sidney’s way of keeping the suspense intact is commendable. This breath-taking novel portrays grey shades of each character, making it impossible for the reader to figure out which one of them would be the real culprit. All cousins react very differently on receiving the news of Sam Roffee’s death and this just confuses the reader even more. The  reader shares each character’s victory, tragedy and temptation. We despise the characters yet love them because we get a lump in our throats as their individual stories are revealed. We hate them for the decisions they make and pity them to see how evil tempts them.

Sidney’s way of keeping the suspense intact is commendable. We are almost led to believe that the protagonist is killed when the chapter ends with only the description of the accident and how Elizabeth is almost dead. The scene where she is shown driving closer and closer to the brink and is driving too fast to jump from the jeep is a memorable one. Sidney attracts his readers by writing the scene in the given way-

“The edge of the cliff was just ahead of her, the sea hundred of feet below. As the jeep hurtled towards the edge, it went into a wild skid, and the last thing Elizabeth remembered was a tree looming up in front of her and then an explosion that seemed to filled the universe. After that, the world became still and white and peaceful and silent.”

We know that she cannot die in the beginning yet we fear the worst.

In another attack on Elizabeth, where her private elevator is crashed, a chapter ends with only these lines, and we quote –

“Get away!” the guard yelled. “It’s going to crash!”
They ran from the bank of elevators toward the farthest wall. The lobby was beginning to vibrate with the speed of the runaway car inside the shaft, and the guard thought, Don’t let her be in it, and as the plunging elevator shot past the lobby, he heard the terrified screams from inside.
An instant later, there was a loud roar, and the building shuddered as though it had been hit by an earthquake.

Thus, at the end of the chapter, we’re aware that the elevator has crashed and assume that Ms. Roffee must be dead. We are just told of the accident details and police investigations in the next chapter. We are not told that she is alive until another full chapter.

[Sheldon weaves the story cleverly, and also does not forget to depict the hot, sizzling and heart-stopping romance for which he is quite famous

Another interesting  factor that makes Bloodline even more mysterious is Sheldon’s way of narrating the story by the murderer’s point of view, without disclosing the identity. A certain phase in the plot, where Elizabeth turns down the other board members’ idea of taking the company public, the chapter concludes with the murderer’s point of view – “They were all watching her, each busy with his own thoughts. One of them was thinking, Oh god, She’s going to have to die, too.”

Tension builds up as we see how Elizabeth is unable to outwit her assassin and you yourself will start doubting your guesses and gut instinct. You keep asking yourself if the character in the eye of the storm is a genuine, or merely an imposter. Sheldon weaves the story cleverly and also does not miss out on depicting the hot, sizzling and heart-stopping romance for which he is quite famous. The strong and magnetic personality of Rhys Williams is sure to attract the female readers as we read on to realize how he is the perfect gentlemen and how Elizabeth is overwhelmed by his evergreen charisma.

The final conclusion is frightening and you’re likely to be taken aback and shocked at the revelation of the villain. The introduction of the the antagonist is mysterious and dramatic, to say the least. The excellent twists make Bloodline all the more unpredictable and even more fascinating.

I vehemently recommend this masterpiece for all Sidney Sheldon fans and for all those who enjoy fast paced thrillers, robustly told and full of action and surprises and unforgettable characters.

In the Bloodline book, Sheldon successfully fabricates yet another action packed best-seller and adorns it with violence, rage, romance, betrayal, danger, greed, jealousy and power. This blood chilling novel will dazzle all readers. Once you’ve begun reading, Bloodline is an impossible one to put down.

You May Want to Purchase: