Although Android fanboys champion the platform’s customization potential – I’m not someone who indulges in changing a lot on my device. I chose Android over iOS simply because I find Android devices to be a lot more beautiful than the iPhone. However, once in a while, I do go down the customization path and experiment with my UI for the sake of a fresh feel. 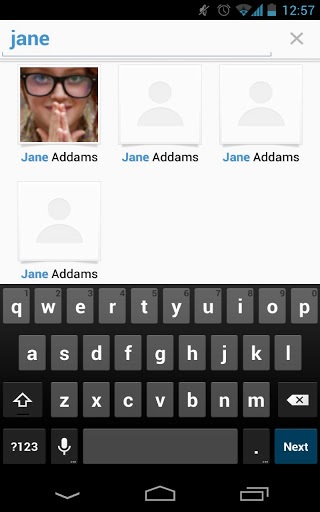 A couple of taps allow me to call, text or email my friends from just one place. The social integration – Facebook, Google+ etc is pretty useful. It takes care of duplication by automatically linking multiple contacts. Having had trouble linking contacts with older versions of HTC Sense, I know this functionality is easier said than performed.

I happened to chance upon Contacts+ randomly on the Play Store one day. After having used it for over a fortnight now, I’d say I’m pretty impressed. While the People app on my HTC One S is not bad at all – Contacts+ can be tempting alternative, specially when it comes with its own dialer. The app’s blue and white themes (there’s a dark theme too) make me feel like I’m running an iOS App (one of the few things I like about the rival platform). It’s clean, it’s simple, and it’s very handy. 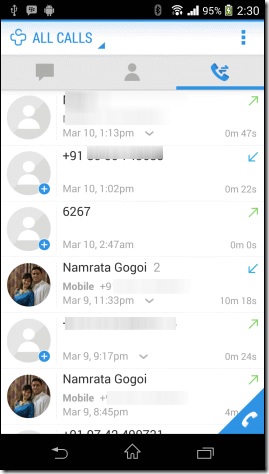 Contacts+ doesn’t stop there, though. It goes one step further and integrates with apps like Foursquare too. A few taps and you can view all the latest updates from your friends on all their social networks. Yay!

Contacts+ also integrates with your text inbox – which is great. With the latest Hangouts update integrating texts into the app, I’ve hated the new UI which shows me my Instant Messages and texts at one place. It looks ugly, disoriented and is pretty confusing. Reading texts on the new, cleaner interface was refreshing.

Widgets make life easier – giving you one-touch access to your favorite people. Birthday reminders work better on Contacts+ than on any other app I’ve used so far.

While there may be a lot I appreciate about Contacts+, a lot of its value diminish if the app doesn’t keep pace with your device. I found Contacts+ to lag at times, and there were occasions when I couldn’t see the contacts I wanted after doing a T9 search on the dialer. It’s a relatively new app, so I’m willing to discount the performance issues for now.

Contacts+ is a compelling alternative – regardless of whether you’re bored of your current contact app or not. The UI is pleasing, and the social integration is the best I’ve seen on any app on Android so far. The lag I experienced is a sacrifice you should be willing to make for now – it’s only going to get better.