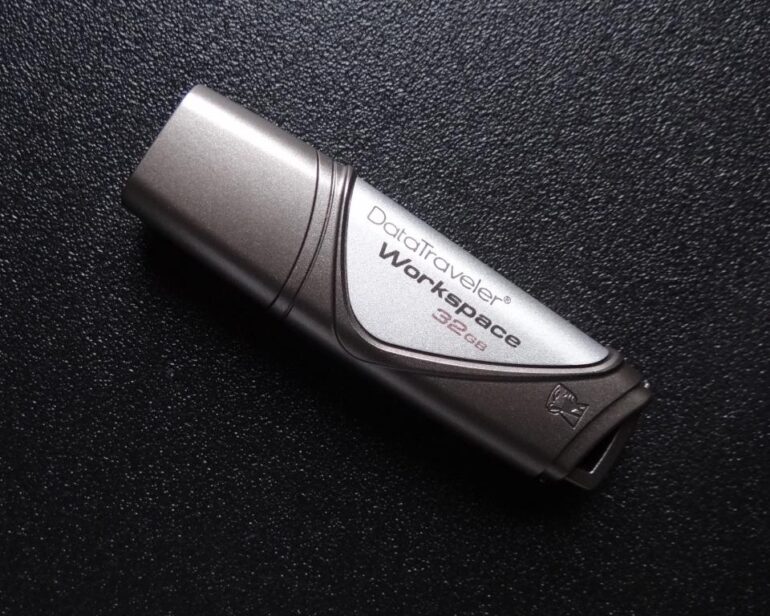 We all want portability when it comes to technology. Whatever the innovation, portability is key to making it appealing to the users. Here, Kingston provides you with a Workspace flash drive. With Windows To Go on it, you can fire it up on most PCs today – allowing you to carry your workspace with you on an OS. Let’s have a better look at it. 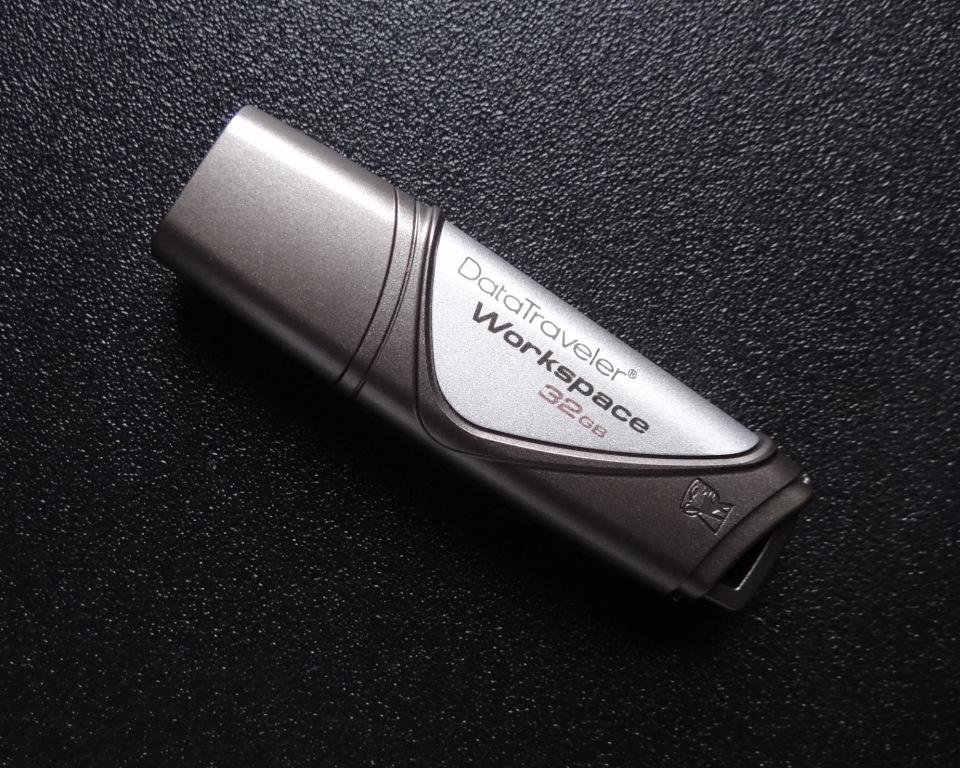 Kingston’s DataTraveler Workspace looks don’t stand out among other high-capacity flash drives. This flash drive has a USB 3.0 connector, on a rugged design similar to the Kingston DataTraveler Ultimate 3.0 Generation 2 (32 GB), with the same total capacity. Larger capacities are also available, with 64GB versions available for purchase and 128 GB versions available for custom order (Pricing varies by order).

The DataTraveler Workspace has a reasonably secure cap to protect the USB plug from being damaged or dirtied, it also clips to the back end of the drive during use. It also has a lanyard loop for the drive, enabling you to attach it to a lanyard or keychain, so that you don’t lose it easily. The pen drive measures 0.65×0.9×2.9 inches so, there is a chance that you might block the off adjacent USB ports when it’s plugged in. But, this eight-ounce drive is definitely more portable vis-a-vis any ultrabook or tablet. 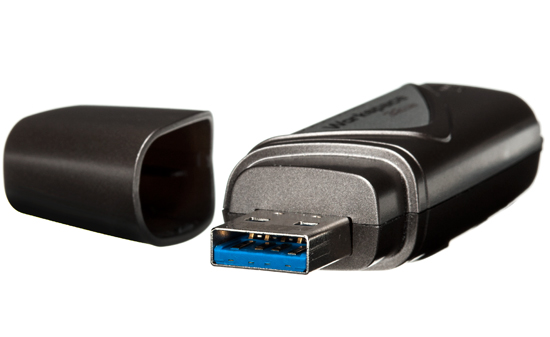 The unique thing about the DataTraveler Workspace isn’t pure storage, but also a portable operating system and reads as a fixed NTFS drive. So, it’s practically a small solid-state drive (SSD), with a complete integrated Sandforce SSD Controller and support for TRIM and S.M.A.R.T commands. Additionally, this flash drive’s security offers a support for BitLocker encryption and Trusted Boot anti-malware and boot protection software.

You can also install programs and save files, as some storage space is available for that, it’s 17.5GB on the 32GB variant. Since, the DataTraveler ‘Workspace’ is designed for corporate use, the flash drive comes with a 64-bit version of Windows 8 Enterprise, which can be used on any machine running Windows 7 or Windows 8. Another amazing feature this drive is that, if you were to accidentally remove the drive, you have 60 seconds to plug the drive back in without losing any data or interrupting your work session. Kingston also provides the drive with a two-year warranty.

Since, the drive uses USB 3.0 to provide the best possible performance while also being broadly compatible, when connected via USB 3.0, the drive offers top sequential speeds of 250 MBps (for both read and write). It’s slower when you connect it to a USB 2.0 port, but you can still plug it into most PCs start up your portable OS wherever you want. 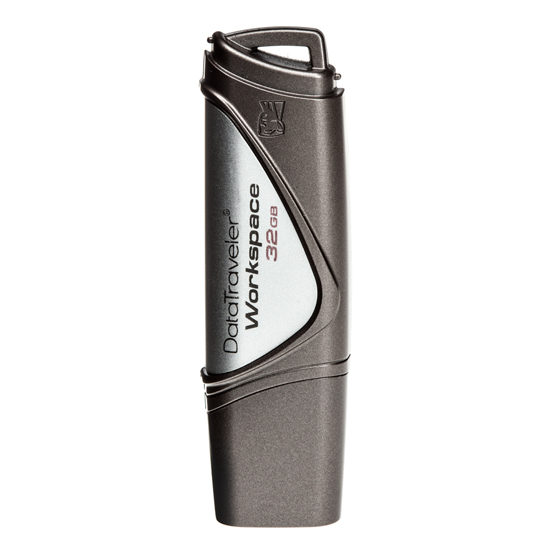 This flash drive has one drawback, it heats up quite easily.

The drive is fairly straightforward to use, after plugging it into the USB port and booting from the drive, which is just at the stroke of a key or two during the boot sequence. Instead of accessing the PC’s regular operating system from the hard drive, it fires up the Windows To Go stored on the drive. Once the drive begins booting, you’ll see the Windows 8 logo on the screen. Then, all you need to do is log in with a Windows ID and you’ll be welcomed by the Windows 8 Start Screen. The initial boot to a host PC may be slow as drivers are loaded, but afterwards, Windows To Go should be up and running in 6 to 8 seconds.

After you’ve booted into Windows To Go, the same hardware you’ll be using is the same as when booting up the target PC normally, with the exception of that PCs hard drive. You’ll get full-powered processing and graphics without accessing the host PC’s files, or it accessing yours, all of the host PC’s drives and the files on them will be inaccessible, and won’t even show up in Explorer. But, you will have access to the storage on the DataTraveler Workspace, as well as any external storage (like a second flash drive or portable hard drive) that you might connect. As a result, you’re safe from any viruses or malware on the host system, and can rest easy knowing that your own files are safe from prying eyes. Microsoft also recommends using Windows To Go in conjunction with either a VPN connection or DirectAccess, and storing larger files and resources on the corporate network. 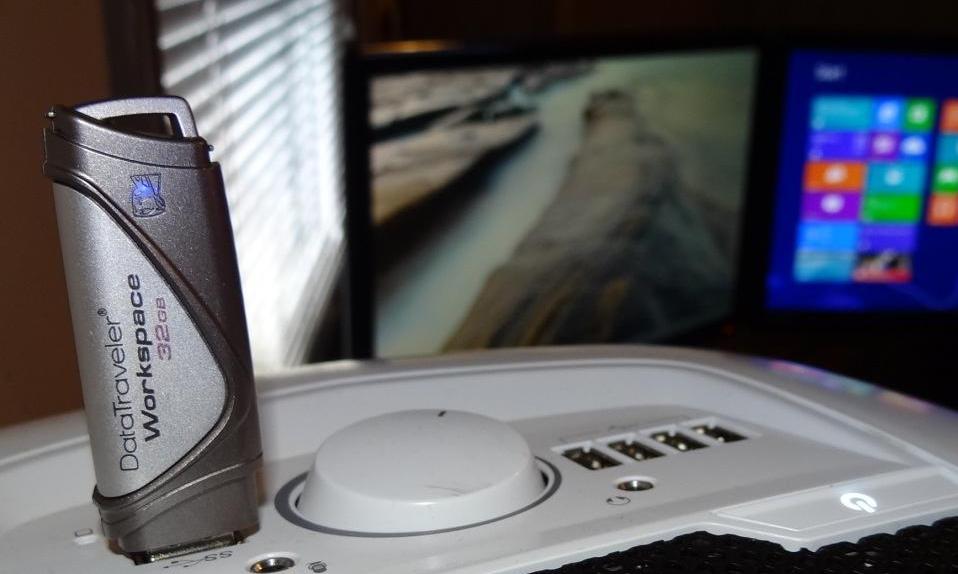 During use, you’ll be able to install and run programs as you normally would onto the Kingston drive. For instance, you can pre-install Microsoft Office onto the remaining space on the DataTraveler WorkSpace, and use that to launch your Word, Excel, or Powerpoint files and work on them. Since, it reads as a fixed drive and not a removeable drive. You don’t have to install a special bootable version of the programs.

Another drawback is that you won’t be able to access the Windows Store or any of the Windows 8 Apps available through it. Also, the size of your primary drive is limited to the remaining capacity of the flash drive. Apart from the differences in storage, the user experience is exactly like using Windows 8 on any other PC, though you may experience a lag when you connect via a USB 2.0 port.

In order to run the portable version of Windows 8, the PC used will need to meet the minimum specifications required of any Windows 8 machine, which are: a processor with a clock speed of 1GHz or more; at least 2GB of RAM for 64-bit systems (or 1GB for 32-bit), and DirectX 9-capable graphics. Most, but unfortunately not all PCs running Windows 7 will meet these requirements. Linux machines that meet these hardware requirements, and that are capable of booting from the USB drive too, although Macs are not supported.

If you need the flexibility of Windows To Go, the Kingston DataTraveler Workspace is a simple and straightforward option. It’s portable and compatible on most current PCs, and offers a high level of security.

You can expect similar devices from Imation and Wester Digital, as other manufacturers have also received Microsoft’s Windows To Go certification. But for an OS that’s good to go anywhere, the Kingston Data Traveler Workspace is an excellent option to go forward with.