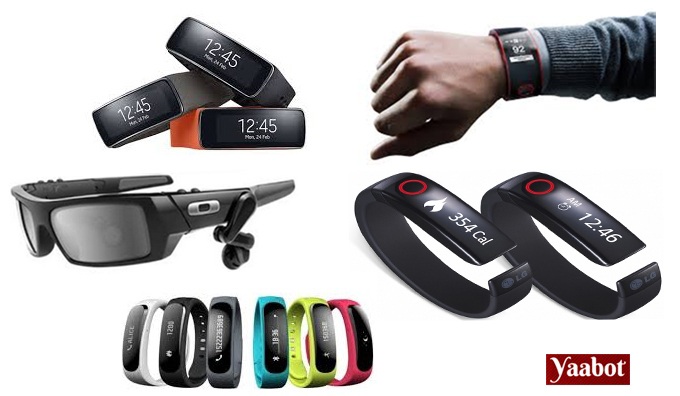 What’s Next for Wearables?

Had you ever thought about a wristband that measures your body activities or some fine glasses that will guide you with maps while driving or a watch that is really smart to show you text or emails you receive? Yes, today we are talking about the latest trend in the market – Wearables. But till now you’ve probably heard all about some smartwatches and Google Glass by now.You may even own a fitness band or two.

Also Read: How Smart will Smartwatches Get? 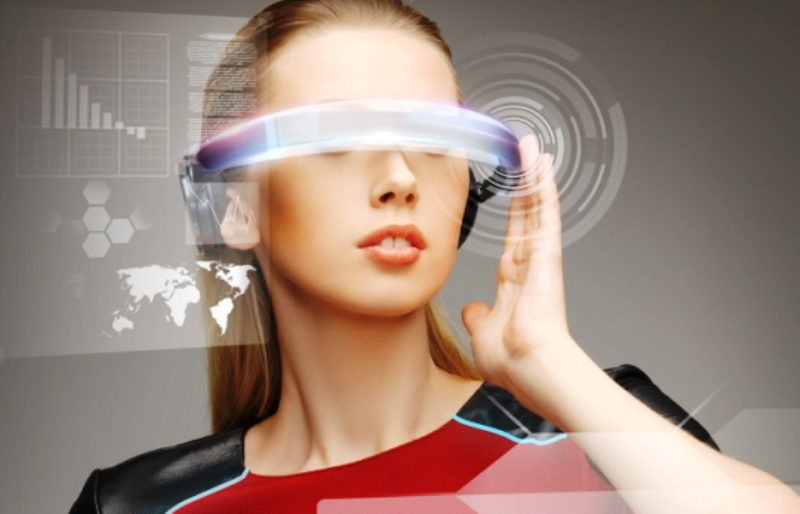 Wearables today are all the rage. They’re heralded as the Next Big Thing in mobile electronics. In just released forecastanalysis, IDC reports that global wearbles sales will exceed 19 million units this year. By 2018, international sales will hit 111.9 million units, resulting in a year-over year,compound annual growth rate of 78.4 percent according to IDC projections.

But for now these wearables are just restricted to certain body parts  –– usually the wrist –– and have limited access to what’s going on with rest of body , like the heart rate, specific muscle activation ,calorie intake or even what legs are doing. We have seen smartwatches with voice calling features.Recent releases like the Intel Basis peak smartwatch and Microsoft’s Band offer highly –detailed fitness and health metrics and also  the LifeBeam hat that have similar features. A wearable called KipstR is also expected to come that sports a pulse-oximeter that can tell is you’re asleep and starts to record your favourite shows when you inevitably succumb.We can also expect wearables with highly intelligent voice recognition features that can perform actions according to the voice commands in near future . Consequent efforts are also made to solve the charging issues of these wearables because these devices tend to take complete course of the day. Wireless charging could be the way forward. Also efforts are made to make devices dust proof and waterproof.

Fortunately the technology is improving quickly.But besides some added features and few technical improvements –– What’s next in wearables?  How about some smart rings, smart shoes or even smart clothes? Let us dive into the future of wearables.

Improved Wrist-bound wearables and smartglasses aren’t the only things we expect in coming future.The next step in wearables may be for devices to move beyond jewellery and onto the rest of our bodies. Although many will be fitness-focused, high-end fashion companies are jumping on the bandwagon, too. The exponential boom in wearables encouraged a lot of product development companies to jump into the world of wearable technology and today, we are going to show you some of the most fantabulous wearable products going to be available in the market in the coming times – 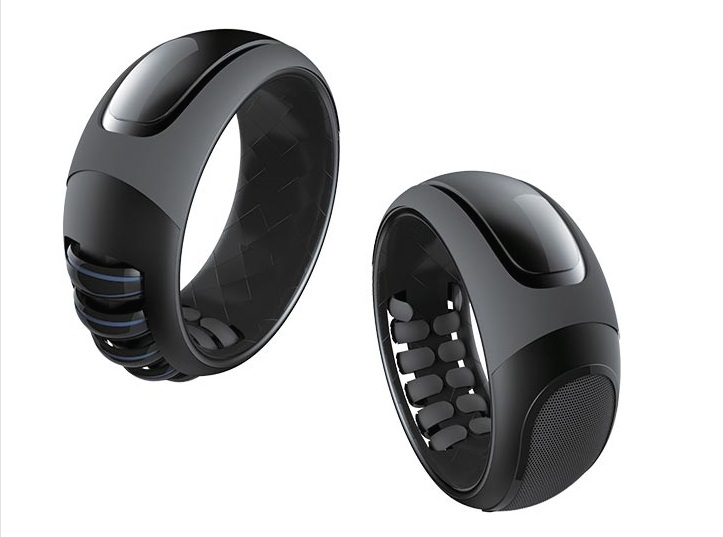 Worn on the thumb, index and the middle finger of each hand, this set of rings translates the finger (or hand) movements into spoken works with the help of the bracelets. The other functionality of the bracelet includes speech recognition and transcription from others, which, in turn, can be viewed by the wearer. The rings are so smart that they can even understand the customized movements for faster communication.

Recently, Intel picked up on the trend with its MICA smart braceletwhich packs smartwatch features into an attractive bangle. I guess that’s something women will like. 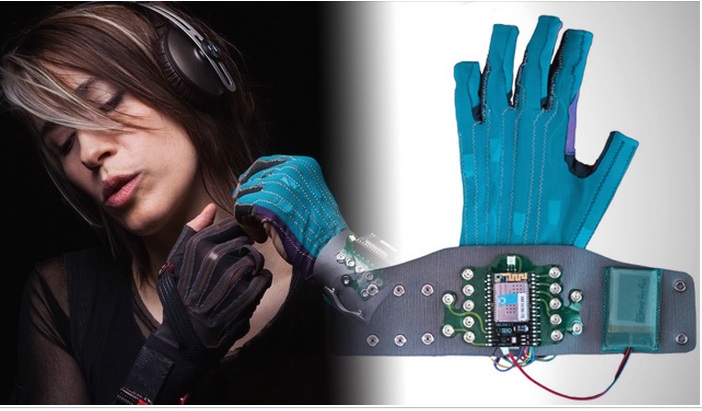 Many of such gloves are already out. Not only do these gloves keep you warm, but they have an integrated headset and microphone. These gloves will connect to any smartphone via Bluetooth and allows you to speak by simply forming your hand the shape of phone. And they have changed the ways of how you enjoy music! Imogen Heap, the famous English Singer and composer recently launched one of the very first music wearable devices. Gloves with touch screen are also seen. Many big names in the market are also working to bring out new improved gloves with added features.

We already know that Google glass has proved to be failure and it has been summarily rejected by all but there’s no denying that the search giant kicked off the smartglasses trend.

Nonetheless, the difficulties Google Glass has faced haven’t deterred other manufacturers in the slightest. Sony, Vuzix, and others already have smartglasses in the works or on the market. hile most of these contraptions aren’t terribly subtle, smartglasses are starting to look a lot nicer. Google Glass now comes with stylish frame options, some of them from Diane von Furstenberg. Another pair of smart specs called the Jins Meme from Japan, look like normal glasses, but pack in loads of technology. The Meme can even monitor your alertness, and ensure you don’t fall asleep at the wheel. Jins will debut the glasses at CES in 2015.We expect to see many more attractive and subtle smartglasses follow in Jins’ steps. 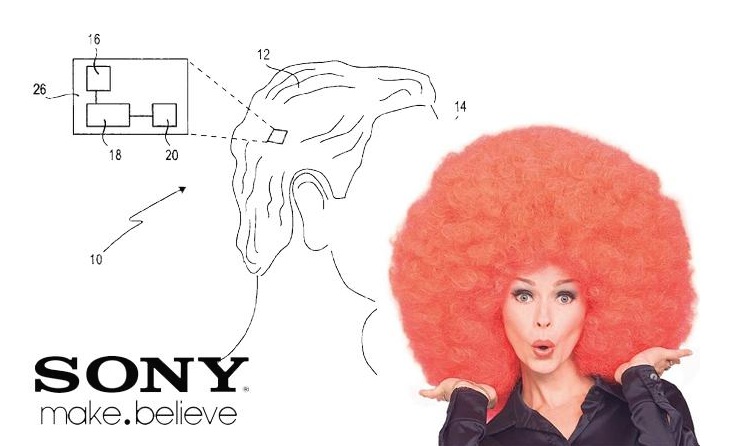 The smartphone giant is not leaving any stone unturned to stay ahead in the game of wearable. After successful ventures in smartphones and smartwatches, the Japanese technology company has filed a patent for a SmartWig. Embedded with several different kinds of sensors, the wig is capable of communicating with a lot of external devices like smartphones, smartwatches and smartglasses. The Smartwig comes with a lot of other incredible features like features built-in GPS tracking system, ultrasound transducers that start vibrating when there are obstacles approaching, and lasers integrated for remote PowerPoint presentations. 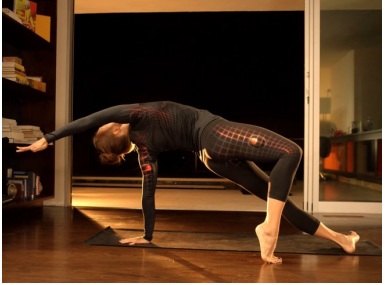 Yes! Soon there will be smart clothes. What if your clothes can get connected with internet? Crazy! Yes, a smart t-shirt created by the Canadian company OMsignal, can now track your exercise, tell you to take breath and make you feel relaxed when you are stressed! Isn’t it amazing? 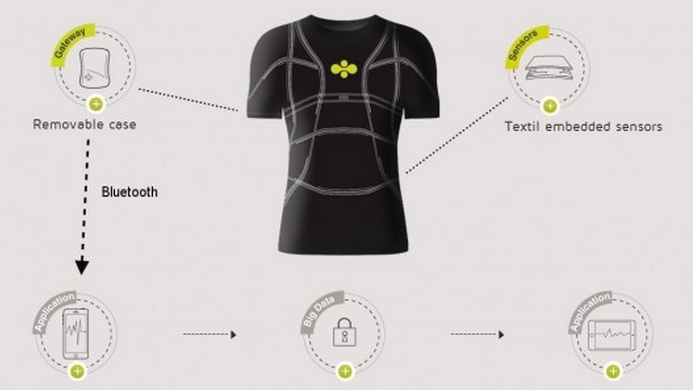 A company called Athos  had hoped to make garments with electronics embedded in them. The Athos workout gear has sensors throughout that pick up on muscle exertion from the chest, shoulders, arms, back, quads, hamstrings and glutes, plus heart rate and breathing. The module insert transmits that info over Bluetooth to iPhones and iPads (no Android yet). The idea is to be able to compare exertion levels between sports, record reps without counting them by hand, and get advice about form — for instance, overcompensating with one side of the body.

Also there’s a new Kickstarter project called Notch that is aiming to produce $50 sensors with snap-on mounts, along with athletic and street clothing to hold it. Each Notch contains an accelerometer, gyroscope and magnetometer, and together they form a dynamic wireless network and communicate info to smartphones (also iOS, to start) over Bluetooth.

Just imagine the reach of technology with Moticon, the world’s first fully integrated and wireless sensors insole. Compatible with any shoe, these insoles are used to measure the distribution and motion related data for athletes and patients. If we talk about its current usage, it is being used for patient monitoring and rehabilitation analysis in medical sciences and for training analysis in sports. In 2010, Moticon won the award of the International Innovation for product of the year at the ISPO Sporting Goods Trade Fair. Truly incredible! 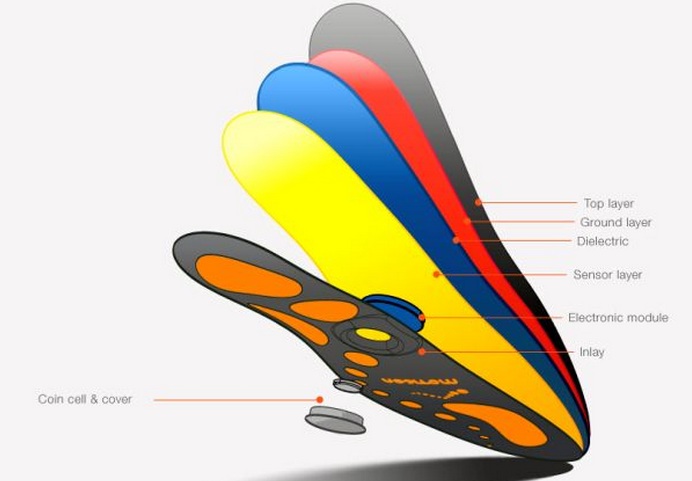 Not only are many of the fashion-focused, crowd-funded pieces of wearable tech arriving for sale online in 2015, but Apple’s first smartwatch is set to debut next year. Competitors like LG, Samsung, and Asus are sure to step up their game in 2015 with more attractive wearables, and maybe they’ll even make a watch or two for women.

There’s no doubt 2015 will be the year of the wearable. It should be interesting to see which form factors hit the mainstream and 2015 –– it is really going to be sexy !