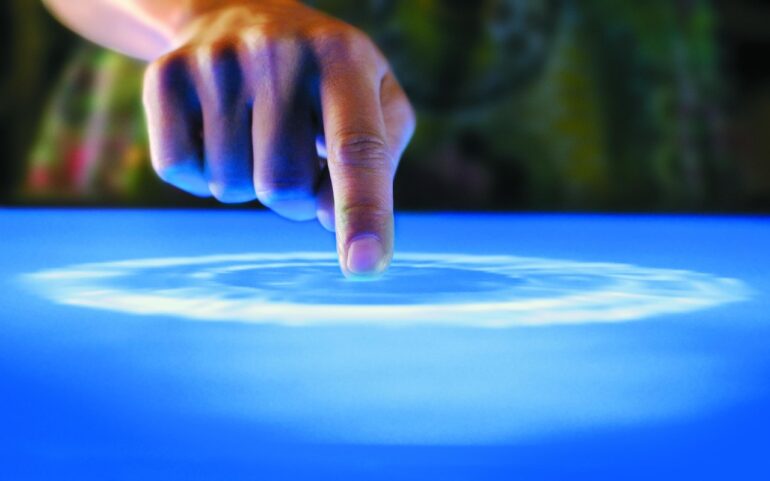 What if we told you that in the near future, you will be able to feel the texture of things that appear on your phone display? With your bare fingertips, it will soon be possible to touch and feel objects that you see on your screens – the rough edges of rocks, soft fabrics of silk, smoothness of leather and so on. The technology that enables this feature is termed ‘haptic technology’, or we can call it ‘surface haptic technology’ while referring particularly to the rendering of haptics in 2-D display screens. The 21st century is yet to witness another big leap in technology with the development of surface haptics. We can say this because our current technology focuses mostly on our sense of vision and hearing; but haptics is working to add a sense of touch to our devices. Let’s dig deeper.

The term ‘haptic’ comes from the Greek word haptesthai, meaning “to touch”. It deals primarily with the creation of tactile feedback system in devices. Haptic technology stimulates a sense of touch in electronic devices by using different forces, motions or vibrations. Surface haptics focuses on the stimulation of a sense of touch in flat surfaces like screens of computer, smartphones, etc.

Haptics is not a new technology at all. Its development began in the 1970s where it was first used to improve aircraft control systems, and then to stimulate gaming experiences in devices such as Sega’s Moto-Cross. Several devices supporting haptic feedback came about – they were mostly for gaming and robotics. Surface haptics, however, came to picture with the launch of the first haptic phone by Samsung in 2007 that allow the phone to vibrate in different ways for different calls. Many smartphones today have haptic technology rendered in them in the form of controlled vibrations. The vibrations you felt while playing a game in your smartphone or while you type messages in your keypad – all are forms of haptic feedback in a way. However, it doesn’t end there.

Current surface haptic technology works with controlled vibrations carried out by different types of mechanical devices like Eccentric rotating mass (ERM), Linear resonant actuators (LRA) and Piezo actuators. Here, ERM is the oldest technology and is present in most modern cellphones – but this technology is limited to causing simple vibrational patterns. Linear resonant actuators (LRA) are being implemented in many new smartphones. It consists of a magnet attached to a spring that moves in linear fashion to cause vibrations on the screen. However, this is also unsuitable for effective touch response.

That led us to ‘Piezo actuators’, which seem quite promising due to the possibility of stimulating localized haptics. Piezo actuators consist of a thin strip or round disk that create vibrations by bending flat and back. Finely tuned vibrations are possible using this particular device, which allows the stimulation of different textures on the screen. Several companies are now working to develop this technology and enhance it for use in everyday gadgets like smartphones, tablets, etc. many of their designs seem quite appealing. It’s not wrong to say that we are just waiting for gadget companies to implement them in their products.

Immersion Corporation, a leading company that works in the development of surface haptic technology, uses Piezo actuators in the haptic systems it develops for smartphones. Immersion has released haptic technology such as ‘TouchSense 5000’ to allow display surfaces to give the impression that it has a texture when touched. Recently this company has signed a multi-year agreement with Lenovo to employ Immersion’s TouchSense haptic technology in tablets and phones. Another company called Tanvas Inc. has developed a variable-friction tactile display that is currently embedded in Motorola’s Moto G phones although it doesn’t turn out to be of that much surprise. Tanvas achieve haptic feedback on their display screens through ultrasonic vibrations of touch surface caused by Piezo actuators. The future of Tanvas’ haptic technology looks quite bright.

Deepfakes Are Growing: The True Beginning of the Post-Truth Era

Another leading company in this field is a Finnish startup – Senseg, recently acquired by China’s Shenzhen O-Film Tech Co. Ltd. Senseg’s surface haptic design is based on touch sensations stimulated by electrostatic forces that appear when a finger press two layers of the sensors together. The electrostatic force changes the friction between the finger and the surface, making it possible to mimic sensations of textures and shapes on touching the screens. Tech giant Apple seems to be interested in this technology and it has even filed a patent for a haptic technology for display screens that uses two Piezo actuators working side by side to create a touch sensation. According to a recent market research conducted by Technavio, the global market of haptic technology in consumer electronics is expected to grow at CAGR of 21.1% over the period 2014-2019. It won’t be long before enhanced haptic technology storms the market.

The possibilities are endless

If we can effectively implement haptic technology in our touchscreen displays, the possibilities are enormous. One of the most noteworthy applications will be for the blind. Surface feedback will enable people with impaired sight to use touchscreen devices used by the general population. With improvised tactile feedback systems, they will be able to feel the buttons and patterns in displays screens without the need of narrator software. Surface haptic designs will allow users to feel textures and shapes of items before buying them, 2-D maps on phone screens will give interactive relief sensations upon touch, our photographs will become more alive than ever – the list goes on. This technology will also help in the field of academics and arts in countless ways. Can’t wait to get my hands on a device with running this.

In the near future, just as multi-touch feature is a must for today’s touchscreen display, surface haptic technology could end up being a standard feature. We will be experiencing a completely new type of interaction with our touchscreen devices.