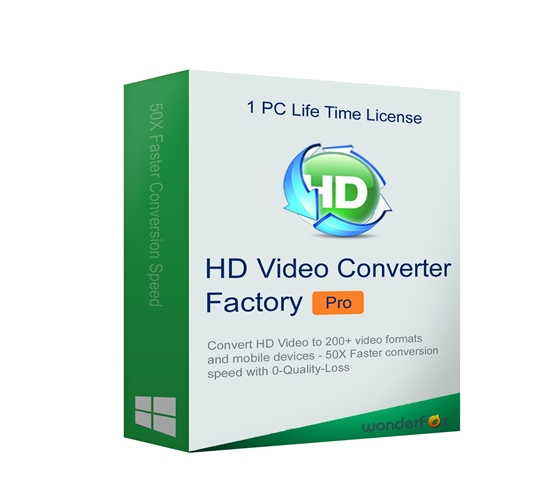 If a picture is worth a thousand words, a video, is probably worth a lot more! It’s now beyond easy to record whatever we wish on portable, handheld devices like smartphones with great ease. However, compatibility often remains a common issue with videos. It’s the most frustrating thing to have found a great video, only to be stuck because it’s not compatible with your current phone, laptop or smart TV. There’s no default software that comes with any OS for video conversion, making it necessary to use third party applications, which help you convert videos to the formats you want, make all kinds of adjustments, and even merge or edit videos! Wonderfox’s HD Video Converter Factory Pro is one such software. It’s effective, fast and has a user-friendly interface, and gives a range of additional features which help you tinker with videos. So let’s delve into a review of the product.

The make or break of any product is its features, and how useful they are in the context of their functions. The HD Video Converter Factory Pro excels in this regard, providing a range of features even beyond mere video conversion. Some of its most prominent features are as follows:

WonderFox HD Video converter offers a wide range of over 300 file and device formats for video and audio conversion. However great any converter’s quality is, it’s not really of any use if you don’t find the format you want in it, but you’re very likely to find the format you need in this converter. Besides the popular formats like MP4 and UHD, it offers all major audio formats like MP3 and FLV, as well as device-specific formats for various phones and even smart TVs. Also, if you aren’t familiar with the various video formats, the software recommends the most suitable one for you.

Besides converting downloaded videos across a varied list of formats, WonderFox HD Video converter provides a nifty feature that can actually prove very useful. You can easily download videos from various websites through this software. This feature is, however, a little tricky when it comes to large YouTube videos.

Although video conversion is certainly its main function, HD Video Converter Factory Pro provides some rudimentary tools to make and edit videos. You can make a video from a set of photos, merge two videos, play around with its volume a bit and even add or remove subtitles from it!

Speed is a feature we all look at when it comes to any program or application, and the WonderFox HD Video HD Video Converter Factory Pro doesn’t disappoint. Conversion speeds are very high in the paid versions, although the free version takes a hit in this feature.

Videos are usually very large files that take up a lot of space. When you wish to email a video to someone, it often becomes difficult because of the limit on file size. With this software, compression becomes quite easy. Of course, it’s difficult to bring a large movie file to an acceptable size for an email, but compression of up to 80% can be done through this software.

In addition to these great features that set this software apart form its counterparts, it also provides some other features like:

The software has a free trial version, but it’s pretty limited. It has limited functionality – you can only convert 5-minute clips at a time. The conversion speed is also quite slow in this version. However, it’s a great way to try the software for yourself to see if you’re willing to shell out money for it. There are three other versions that you can buy – the single-year license ($29), the lifetime license ($69.95) and the family pack ($79.95).

Surprising Facts About The Internet

The best part about this software, perhaps, is that it is delightfully easy to understand and use. Everything on it is pretty self-explanatory, and the user interface is simple and clean. Even if there is difficulty using its more advanced features, there are video tutorials available right in the software and their tech support is also quite responsive. This simplicity is particularly astounding because it’s as powerful as any of its more complicated counterparts.

No product is without its disadvantages and this one has its fair share like any other. However, the pros far outweigh the cons. Most of the issues are either manageable or easily fixable. The biggest disadvantage with this, perhaps, is the fact that it is not free. However, even the lifetime version of this software is affordable enough that amateur and professional video editors would consider it worth the price. All in all, it’s a great software to have. It’s easy to install and use, and has a variety of tools to make video conversion easy and customized to our needs. However, for casual users who aren’t likely to use the software often, a cheaper or free-to-use alternative would be more suitable.