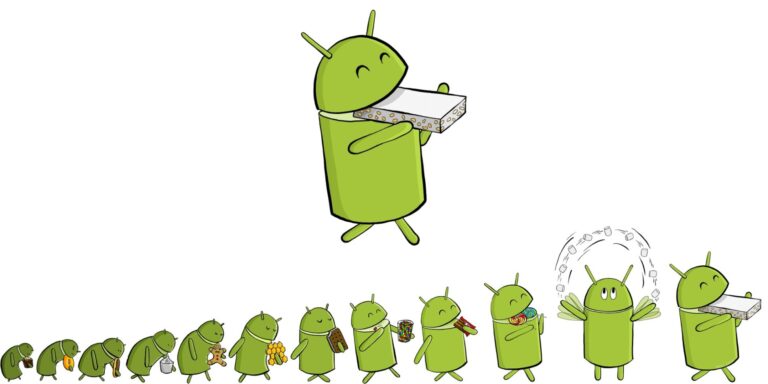 Android is the most widely used mobile operating system on the planet today. Android Inc. a start-up, was founded in Palo Alto, California in October 2003 by Andy Rubin, Rich Miner, Nick Sears, and Chris White. In July 2005, Google moved to acquire it. Google then launch the Linux-based operating system on November 5 2007.

Initially developed as a platform for digital cameras, manufacturers soon began to focus it on smartphones. The first commercially available Android phone was launched in September 2008 by HTC, called the Dream. The OS remains open source – which allows manufacturers to freely customise the software according to their requirement. Now, the OS powers all sorts of devices – from car systems to TVs.

Google, in official releases, has gone on to say that ‘since these devices make our lives so sweet, each version is named after a dessert’. Except for the first two versions, all other are indeed named after desserts. And this is done alphabetically.

The initial versions 1.0 and 1.1 were not given any specific names, but nevertheless were pathbreaking innovations. They allowed data synchronisation with Google, came came up with Google Maps, and delivered a far better mobile browsing experience.

Released in April 2009, this version brought support for video recording with the camera. It also supported a virtual on-screen keyboard. Shortcuts and widgets made an appearance on home screen. Users could now upload content ti YouTube and Picasa. With the copy and paste feature in the browser, it made surfing experience better.

Released in September 2009, Donut was tailored for multiple screen resolutions, supporting smartphones of different sizes. It included a quick search box with voice and text search entry. Satellite navigation support in Google Maps was the major add on this version.

It was launched in October 2009 and 2.1 in December 2009. It improved its user interface with live wallpapers and animations on the home screen. Support for multi-touch functions and multiple Google Accounts were also introduced. Speech-to-text came bundled in as well. Turn by turn directions using Google maps first made an appearance here.

Released in May 2010, Froyo optimised performance with the introducing of the Dalvik JIT compiler. Dalvik delivered over 5 times the performance available previously on Android. The portable Wi-Fi hotspot functionality was added for better connectivity. A zoom gesture to view gallery pictures was introduced.

Released in December 2010, Gingerbread modernised Android gaming. It remained the most popular version of the OS for a long time. With the introduction of Near Field Communication (NFC) support, sharing files with the tap of a device was made possible. Support for SIP for internet calling and front facing camera for video calling also showed up.

Released in February 2011, Honeycomb was exclusive to tablets. Several UI aspects and apps were updated to take advantage of larger screens.

Released in October 2011, ICS was a major redesign with its Holo theme. Facial recognition to unlock devices first made its appearance here. It also added the ability to take screenshots. Tracking mobile data usage was another faeture introduction.

Jellybean hit phones in July 2012 with a focus on an a cleaner interface that worked faster. Google Now, a personal intelligent assistant now found on all Android phones, first made its appearance here. Jellybean also added the ability to customise notifications for specific apps.

KitKat hit phones in October 2013. It brought with itself the always-listening ‘Ok Google’ voice search functionality. It supported an emoji keyboard, lock screen widgets and a dialer with the caller ID support.

Lollipop was an all-round change at how Android looked and felt. Launched in November 2014, Lollipop it introduced ‘material design’ – a set of guidelines for all apps that would now be made for the platform. A battery saver mode was added for long lasting usage. It supported multiple sim cards and 4G LTE calling. Notifications could now be seen in lock screen in the form of arranged cards.

Marshmallow launched in October 2015. It came with fingerprint support, and a doze mode to save battery life while the phone was on standby. The app permissions could now be granted individually at run time.

Launched in August 2016, Nougat supported multiple windows for operating two apps at the simultaneously. There was picture-in-picture support for Android TV as well. The built-in capability permitted use of two or more languages at the same time.

So far, the OS powers over two billion monthly active users and is the largest installed operating system worldwide.