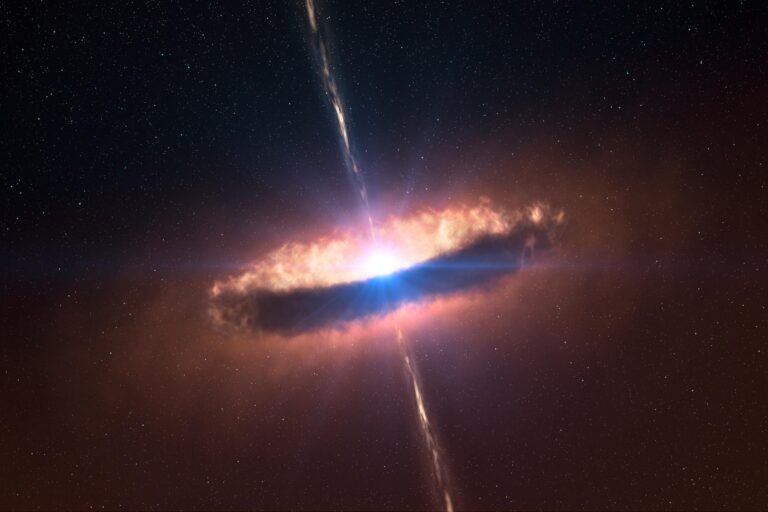 A grand illusionist has recently come into the picture, making an attempt to defy the laws of physics as we know it.  This mystical figure is seen in the guise of an energy beam shooting out from the centre of black hole of the galaxy – the Messier 87 (M87).  The magic trick of the century – a jet of plasma moving at a speed almost five times the speed of the light! At least that’s what the Hubble Telescope’s measurements point to.

What and where is it?

The M87 is not exactly your next door neighbour. In fact, according to Newscientist, it is tens of millions of light years away. The M87 is a supergiant elliptical galaxy located in the Virgo cluster. It was believed to have been formed by the merging of two galaxies in that cluster. At the heart of the M87 galaxy is a black hole having a mass of about 3.5 billion Suns. A disk forming a sort of funnel surrounds it, and a jet of plasma, shaped like a thin beam, shoots out from the core. This jet stream that is emitted measures almost 6,000 light years across. (A quick refresher- one light year is equal to about 6 trillion miles, that is, about 9.5 trillion km!)

How the motion appears to be faster than light

The jet of plasma is believed to be caused by gas and stars being sucked into the black hole at the center of the galaxy. This gas is then heated up and shot back out by the action of magnetic fields. How exactly does the jet appear to be travelling at a speed that is faster than that of light? Well, this could be explained on the basis of Superluminal motion. In simple terms, it means – faster-than-light motion, and is observed in stellar objects such as quasars and in some radio galaxies which are thought to possess a black hole.

The jet travels at a speed comparable to that of the speed of light, at a very small angle towards the observer. At every point in its path, the jet emits light. The jet seems to approach the observer quicker than the light emitted. This gives rise to the illusion that the jet is moving faster than light!

Developments in the observation of the jet stream

The M87’s extraordinary plasma jet was discovered by astronomer Heber Curtis almost a century ago, that is, way back in 1918. Years later, from 1995 to 1999, the jet’s development was observed by the Hubble Telescope. It was in this period of time that it was noticed that the jet of plasma seems to ripple out faster than being emitted from the black hole.

It took almost 13 years of imaging to show that the plasma didn’t move in a straight line, as believed earlier. In fact, it was observed to move in corkscrew-like spirals.

This enigmatic phenomenon is not restricted to the M87, but in fact, has been observed in many other galaxies. It just happens that it is one of the closest galaxies that is visible from the earth, making it easier to study.

What do scientists have to say about it?

Light travelled faster in the very early stages of the Universe. At least that’s what Spanish physicist, João Magueijo, believes. Many scientists, such as Magueijo have been pondering over the question- what if the speed of light is not constant? According to Einstein’s theory of relativity, the speed of light in vacuum is constant. This is true for observation with respect to any frame of reference. On this basis, it has been postulated that only particles with zero rest mass may travel at the speed of light. But according to the Scharnhorst effect, when the energy of vacuum is lowered, light itself that is travelling through vacuum has been predicted to move faster than its standard value!

Why We Need More Plutonium 238

So then how exactly is faster-than-light motion possible? Well, the existence of particles called Tachyons, or faster-than-light subatomic speedsters, has been hypothesized. But if such particles were to actually exist, they would need an infinite amount of energy to stay in motion! This is because, as matter gains more and more speed, its mass increases. An increasing amount of energy is required to keep matter moving faster and faster. Besides being mind-boggling and impossible to test, it also contradicts the theory of relativity!

Scientists are yet to come up with a plausible explanation for the faster-than-light plasma jet phenomenon. Many questions remain unanswered- how does outflow of energy from a black hole work? How much energy is involved? How does this phenomenon contribute to the formation of galaxies and stars? Most importantly- what are its implications on the established speed of light?

Faster-than-light motion continues to confound scientists all over the world. If it were possible, it would completely shake the foundation of our understanding of Physics, and, ultimately, the Universe!