The internet – none of us can live without it. However, we are living with some pretty terrible net connectivity. How terrible?

Well, a recent study by Akamai, a content delivery network which manages an internet content delivery system used by hundreds of major websites across the world, India ranks 114th in the world as far as connection speeds go, with the net average connection speed of the nation standing at a measly 0.9 Mbps. To put that into perspective, the global average connection speed is 12.5 Mbps. Only four other countries in the world – Libya, Nigeria, Nepal and Iran – fare worse than India on this parameter.  In fact, most of the ISPs or Internet service providers define broadband internet as “connections with a minimum download speed of 256 Kbps”. The telecom authority of India has, in fact, raised the bar for minimum download speeds to 512 kbps. But many ISPs of India continue to sell 256 kbps connections as broadband internet. 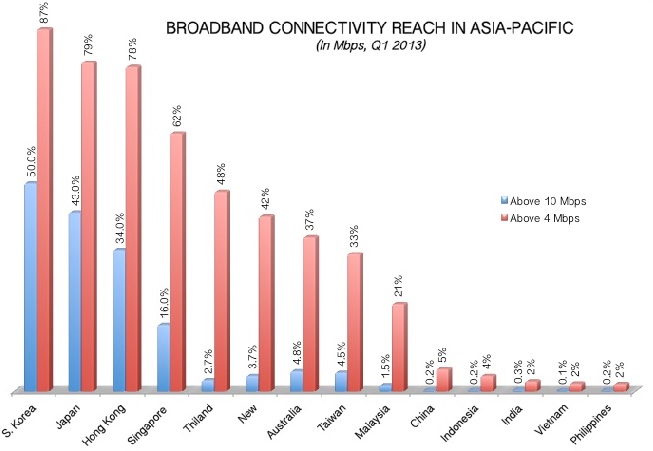 If you’re a broadband internet customer, you’ve most probably heard of the “Fair Usage Policy” or FUP. This is basically a cap on the amount of data a user can download before the speed is reduced. In most cases it’s as low as 3GB of data. (That’s just a couple of HD movies or a season of your favourite sitcom, come to think of it) That’s about as “fair” as apartheid.

To get a wired net connection in India, one can either approach a telecom provider (like BSNL or MTNL) or a cable provider.  More often than not however, hapless citizens are at the mercy of cable providers, who charge exorbitant amounts of money. Telecom providers are slightly more reasonable; however, the quality of service is abysmal.

The wireless internet scenario must be a lot better than cable based internet, right? NO. Although carriers promise 3G speeds of up to 3Mbps on their respective networks, a quick speed test reveals that we usually only get about a tenth of that speed on an average. Also, the degree of 3G coverage in urban regions is pathetic to say the least. Lastly, there’s nothing 3G about 3 Mbps speeds.

Internet Penetration is 10% in India

Another damning statistic is the degree of penetration of internet connectivity stands at 10%, and the number of Indians using the internet is 3%. According to Google chairman Eric Shmidt, the reason for the terrible state of internet infrastructure is due to the unwillingness of the government to invest in high speed telecom networks. India as a country always has been a slow adopter of technology- in a market driven by price constraints, Indians always wait for the price of technology to attain a very low price before adopting it.

In a country that boasts of having the 3rd largest facebook user base and being the 5th most active country on twitter, the pathetic state of Indian internet is truly appalling.  The role of the internet in youth awareness, activism and even governance has reached a stage where it cannot be ignored. Some have even suggested a separate ministry for internet services to regulate the net connectivity, but this option seems a bit too farfetched, not to mention slightly comical. Newer net providers are slowly emerging in urban areas and many city dwellers are taking advantage of them. On the whole, however, the scenario still looks pretty bleak. Internet usage and internet infrastructure development need a huge push – and increased fibre optic cabling being introduced in the country couldn’t come at a better time.