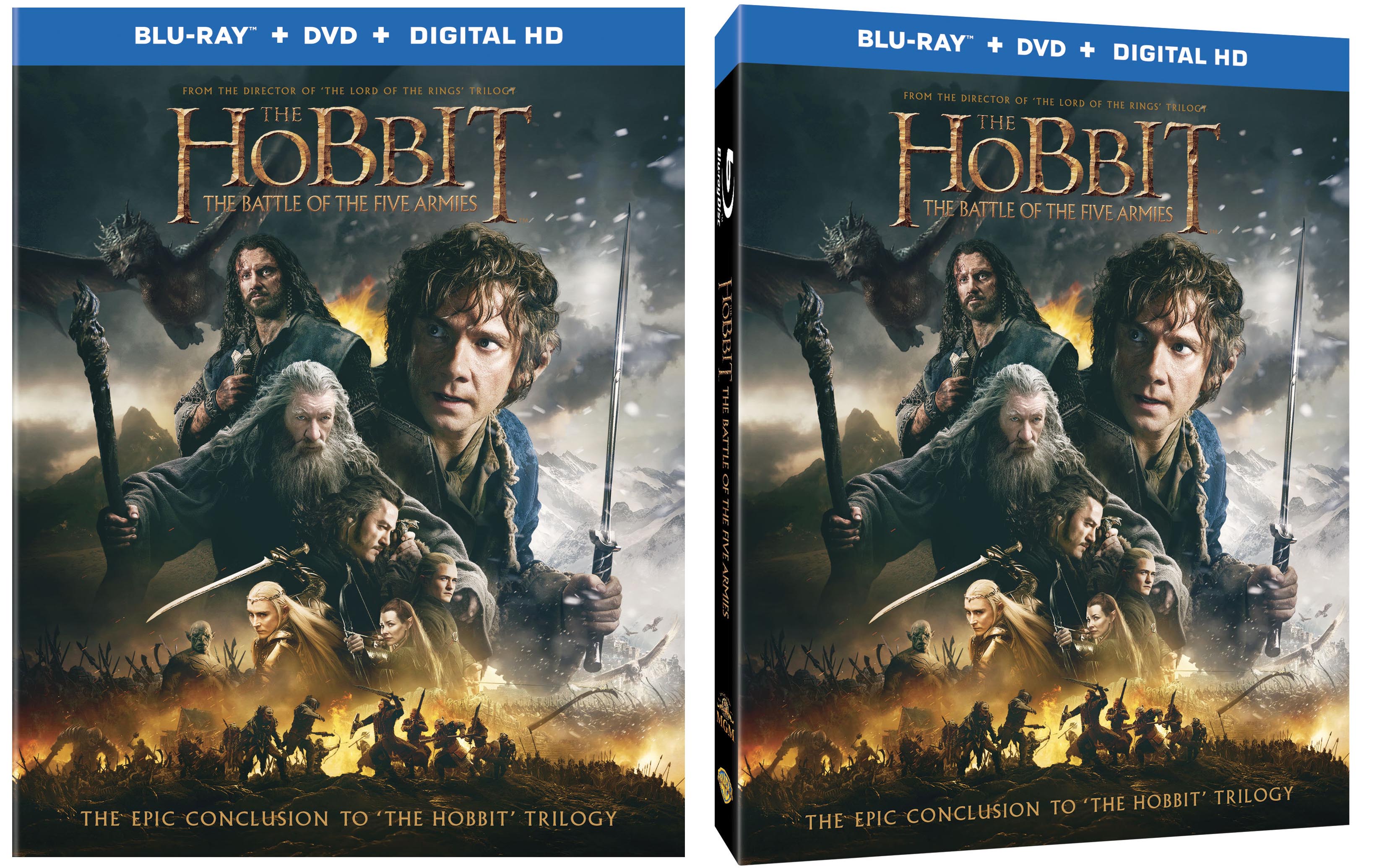 The legacy of an epic fantasy, packed into a beautiful poetry in motion, expanding to some exceptional performances and astoundingly marvelous screenplay- that’s what ‘The Hobbit: The Battle of The Five Armies’ simply is. It embarks the legacy of director Peter Jackson, and marks itself as the last movie of cinematographer Andrew Lesnie and The Hobbit Trilogy. This was definitely the most satisfying dessert to a hefty lunch. The story revolves around how Bilbo Baggins and his fellow mates secure the Lonely Mountain from the grueling dark powers.

Sony DADC proudly launches the Blu-Ray and DVD versions of the legacy, ‘The Hobbit: The Battle of The Five Armies’. Now, the Blu-Ray quality is the cherry on top of a breathtakingly beautiful movie, with every frame having the potential of becoming a million dollar painting and every dialogue good enough to compete a Shakespeare. We luckily got a Blu-Ray version of the movie, by Sony, which included behind the scenes, ‘The Last Goodbye’ Music Video and a lot more, apart from the movie itself. If Lord of the Rings and initial Hobbit movies made you go bananas, this one’s sure to get your appetite to receive the perfect climax.

With the legendary Ian McKellen (Dumbledore for the toddlers!) as Gandalf the Grey, and Martin Freeman as Bilbo Baggins accompanied by superb performances by Richard Armitage (as Thorin), Ken Stott (as Balin), Evangeline Lilly (as Taurin) and a superb supporting cast, the movie has Benedict Cumberbatch in it. (With a very heavy heart for all the female fans, I’ve to inform you all that, Benedict ‘Super-Popular-Modern Day- Sherlock Holmes’  Cumberbatch technically doesn’t appear in the movie, but is the voice of the dragon Smaug. Pretty much like the Scarlett Johansson of ‘her’, just a bit ruder.)

Based on the novel ‘The Hobbit’ by J.R.R Tolkien, this was legendary Academy Award winning cinematographer, Andrew Lesnie’s, last Peter Jackson movie. It was this genius Australian ‘Camera Illusionist’ (since Cinematographer is quite a small word to describe Lesnie), who used 15 stereoscopic cameras to create the movie in 3D. The results were 48 frames per second (double the industry standard of 24). The famous Academy, BAFTA and Golden Globe award winning director Sir Peter Jackson has ensured that every frame of the movie is a legacy in itself, along with the intense performances by the cast and the highly impacting dialogues and screenplay by Fran Walsh, Academy Award Winner Phillippa Boyens, Guillermo Del Toro and Jackson himself.

The opening scene is Smaug attacking the Laketown village, and how bowman Bard kills Smaug (so, Cumberbatch is already gone, before you realize) followed by Gandalf being rescued by Galadriel, Elrond and Saruman at Dol Guldur. Further, the plot moves towards the Arkenstone, which was stolen by Bilbo during his second encounter with Smaug , and how Bilbo sneaks out of Erebor to hand it over to Thranduil and Bard. Meanwhile, the Laketown survivors lead by Bard, have sheltered at Dale, Thranduil arrives with an elf army to form an alliance with Bard. Alongside, Thorin orders the dwarves to shut the entrance of Lonely Moutain. The earlier freed Gandalf arrives at Dale to warn Bard and Thranduil about Orc army which is willing to take Erebor as a part of controlling Angmar. Bard and Thranduil offer to trade Arkenstone for gems and Laketown’s share of gold in the Lonely Mountain, and this offer is declined by Thorin who is later on found dumbstruck to see the Arkenstone in an elf’s hand. This is where Thorin’s cousin Dain comes with his Dwarf army, and worsens the scenario. The battle of Men, Dwarves and Elves now becomes unavoidable, and simultaneously Wereworms surface the ground and Azog’s army emerges. Orc army proves to be the upper hand over the Dail, Thranduil and Bard forces, and Gandalf and Bilbo further join. Tauriel leaves with Legolas to warn the dwarves about Bolg’s approaching army, after being banished by Thranduil. Bilbo follows them with the One Ring. Further story is all about how the Orc army is destroyed and how Bilbo returns to Shire for a normal life.

The movie produced by New-Line Cinema, Metro Goldwyn Mayer and WingNut Films was made at a cost of $250 million, and went on making $950 million at the box office. With nominations for Academy Award (Sound Editing), BAFTA (Special Visual Effects) along with 35 other award nominations, the movie did pretty well amongst both the critics and viewers (except some viewers complaining about a whole lot of action packed audio towards the climax, leading to near mental deafness illusion!).

The Blu-Ray by Sony DADC

The Blu-Ray by Sony DADC is definitely a very special add-on to this phenomenal piece of art. Following is the price constituency of the DVD release:

Recruiting of the Five Armies: a 12 minute add-on which shows the shooting of some scenes, special effect making and funny production sequences.

Completing Middle Earth: It is a six and a half minute sequence which gives the history of the movies plot and how it connects with The Lord of The Rings.

The Last Good-Bye (Behind The Scenes): A superb composition in the voice of Billy Boyd, which captures the storyline into beautiful 4 and a half minute of a song.

New-Zealand: Home of Middle Earth: The cast and crew introduce the viewers to 2 new locations found in the movie, in a six minute additional video.

Priced at Rs.1300, ‘The Hobbit: The Battle of The Five Armies’ will definitely prove to be a classic addition to your movie collection, and an irrevocable memory for your intellect.