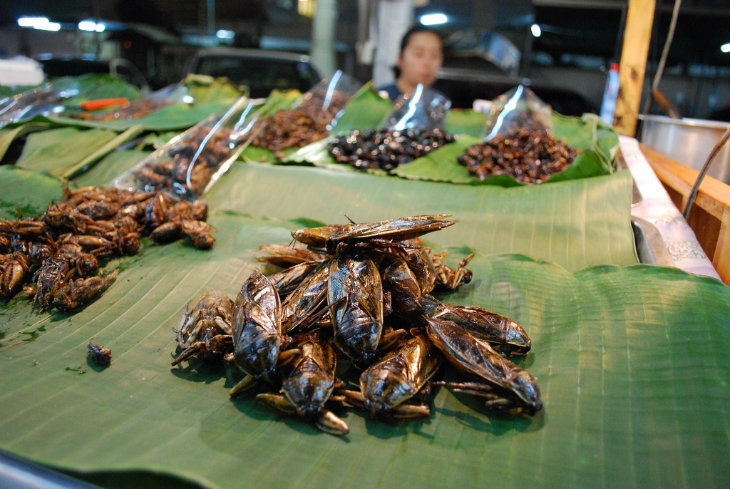 Are Insects the Future of Food?

Insects on the dinner plate in Southern Africa or Latin America wouldn’t surprise natives of the region – they have been consuming insects since ancestral times – because of both tradition and nutritional value. These natives, however, form a population of only 2 billion. According to experts, if life must continue to sustain Earth, this number requires an increase.

Studies suggest that increasing population (expected to hit 9 billion by 2050), coupled with climate change, could lead to a two fold increase in the demand for food. Insects could hold the key to this fresh need for nutrition. They are rich in vitamin, protein and have nutritional value comparable to that of fish.

Continual growth in human population has resulted in a similar increase in food insecurity as well. The need for nutrition–rich food is on the rise. The vast majority of the world’s population currently relies upon both plant-based and traditional meat to meet its nutritional requirements.

There has been a rise in vegetarianism in the recent past, primarily owing to animal welfare and health concerns. This has, in turn, led to a reduced protein intake due to lack of protein content in plant-based food.

How safe is it?

Much to your surprise, the chances of infection is very low.  This is mainly due to the fact these organisms are more different, biologically and genetically, to humans than are cattle.

For our safety, though, insects should be evaluated for any type of contamination, microbial or toxic. Insects being highly nutritious, are susceptible to microbial contamination. Apart from this, there exists physical hazard – insects consumed with their legs attached could block our gut wall, and that could be fatal.

For industries which use insects in packaged food, they should be grown or farmed specifically for human consumption and not for any other species. They used should also be tested for allergic potential as studies have shown people allergic to shrimps and lobsters may also be allergic to insects.

What is stopping us from shifting to Insects?

With countless reasons to consume insects, it is interesting to note that more than half of the world’s population does not indulge in this. Two reasons for this may be: the obvious Disgust Factor and the cost involved.

With most of us spending time and resources on spraying pesticides near our houses, or indulging in kill or at least control insects, it is unimaginable for us to consume them. There’s mental stigma attached, and this roadblock is going to be a hard one to overcome.

To farm or cultivate these insects for the whole world is a very expensive task. It was also observed that when more insects were packed into a farm, lesser protein is produced. Hence, it becomes less sustainable on the long run.