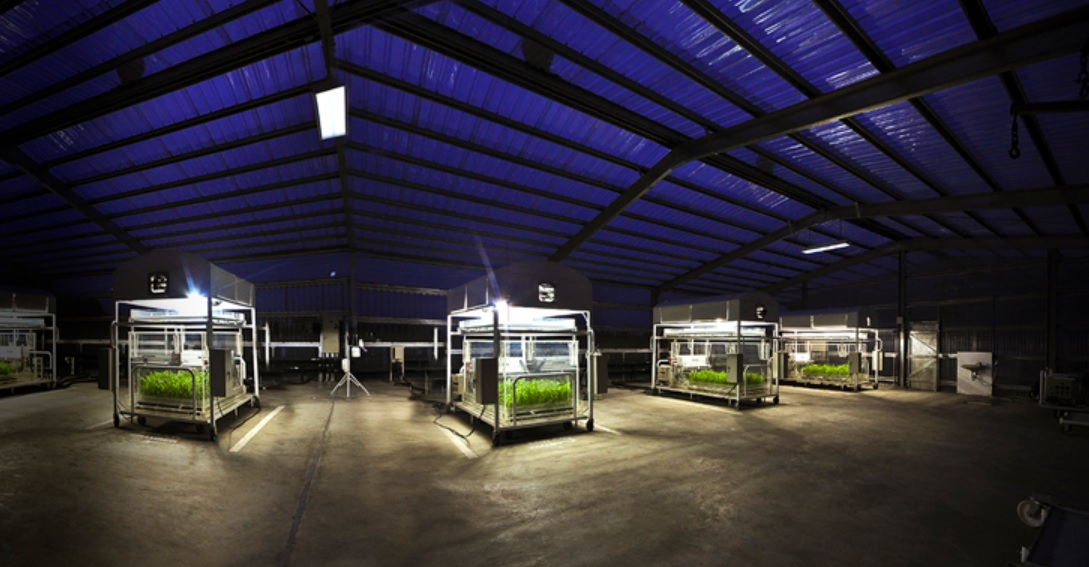 Adjudged one of the 10 best emerging technologies of 2015 according to MIT, Supercharged Photosynthesis is stepping up to meet the increasing crop demands of the world’s growing population. Recently, geneticists from all corners have been analyzing the result of experiments conducted on engineered crops in 12 laboratories spread across 8 countries. The results are certainly positive –  the technique of efficient photosynthesis in rice plants produce twice the production than normal, much like corn or weed plants.

The supercharged process or C4 process is a method of carbon fixation that takes place in plants like sugarcane, corn etc. The C4 pathway is considered to be derived from C3 pathways where unlike C3 it multiplies the plant growth by capturing carbon dioxide and stacking it in the specialized cells of leaves. This initiates photosynthesis and doubles the growth when compared to plants built using C3 process. Statistics have showed that if this method is followed, it will easily meet the crop production demand in two weeks. It has been calculated that engineering C4 photosynthesis into rice and wheat could increase yields per hectare by roughly 50 percent; although it will require less amount of water and fertilizers to produce the same number of crops.

The International Rice Research Institute (IRRI) produced a shocking result about World’s food intake, which shows that 75% of the world’s 6.6 billion people live in the developing world amongst severe food scarcity. 854 million people remain hungry, while about 25,000 die from hunger related causes each day. Sixty percent of the world’s population lives in Asia, where each hectare of land used for rice production currently provides food for 27 people, but the exponential growth of population requires every hectare sustaining 43 people. Also, the area for rice cultivation is continually being reduced – thanks in part to the expansion of cities and industries. Consistent change in climate and water scarcity adversely affect the weather and changes the world’s existing climatic patterns. All these contribute to a decline the crop production. 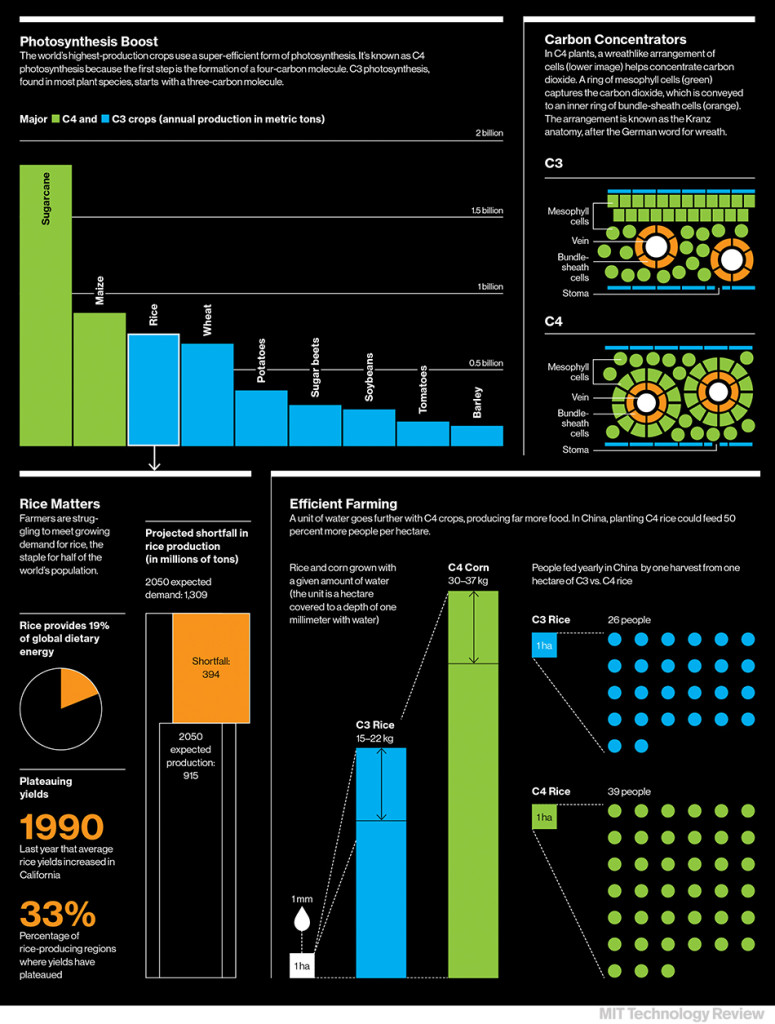 Farmers alreayd seem to have attained the maximum level of production. Research shows that the current maximum rice yields using traditional methods are close to a fundamental yield barrier shaped by the efficiency of solar energy conversion.

The future isn’t looking very bright when you look at the current statistics. Scientists believe that the only way to counter this is to change the biophysical structure of rice plants by making more efficient use of the Sun’s energy. Plants grow by preparing their own complex food using Photosynthesis. Photosynthesis can be of 3 types – C3, C4 and CAM. Rice follows the C3 pathway which is less efficient than Maize or other plants, which use the C4 pathway. To experience the same growth, scientists rearranged the cellular structure in green parts and efficiently implanted the photosynthetic enzymes in correct proportion required as all the elements required to experience a C4 photosynthetic pathway already exist in a disordered manner.

The C3 pathway was first observed in Chlorella, a unicellular algae. In this process, Carbon Dioxide is converted into sugars. So, it is a process of carbon fixation. The first stable compound here is a 3 carbon compound called 3 phosphoglyceric acid(PGA). Thus, it is called C3 cycle. 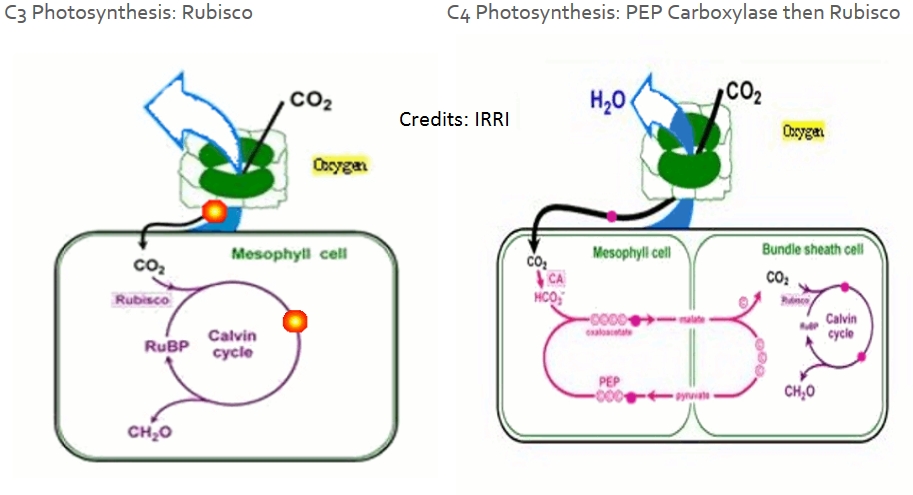 C4 is the alternative pathway taking place during the dark process of photosynthesis. In C4 cycle, the stable compound is a 4 Carbon named oxaloacetic acid and therefore it is known as C4.

In December, the results of IRRI led by Paul Quick in Philippines showed that the C4 gene implantation in Rice, processed a rudimentary supercharged photosynthesis. Thomas Brutnell, a researcher at the Danforth Plant Science Center in St. Louis proudly stated “It’s the first time we’ve seen evidence of the C4 cycle in rice, so it’s very exciting”.

Though the genetic structure is changed, the engineered rice plants primarily depend upon their usual photosynthesis pathway. To get them to switch over completely, researchers need to engineer the plants to produce specialized cells in a certain arrangement in which one set of cells will capture the carbon dioxide surroundings and another set of cells that will accumulate it. That’s the distinct anatomy found in the leaves of C4 plants. However, scientists still don’t know all the genes involved in producing these cells and suspect that they could number in the dozens. 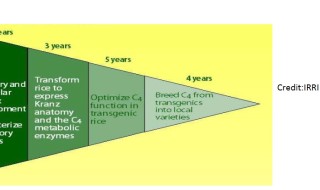 The new genome editing methods that allow scientists to accurately modify parts of plant genomes could easily solve the problem. Instead of conventional methods, newly developed technology can easily replace dozens of genes with required ones.

The whole idea seems very lucrative and might solve the continuous hunger problems faced all over the world, but the program is still limited to research labs and major modifications are required before it can become accessible to the general public.