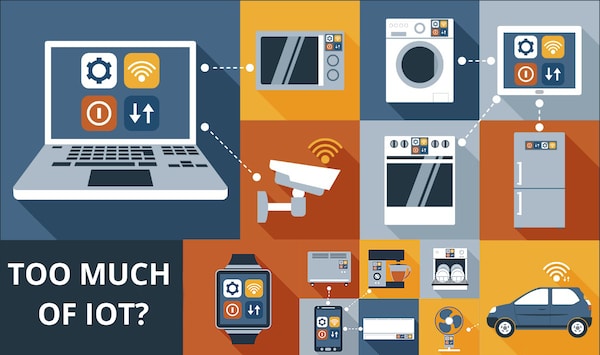 With all the buzz around Internet of Things, we all know that IoT is an amalgamation of novel services that are a product of huge amounts of data and interconnected devices that generate the data. These interconnected devices can not only connect to machines but can also talk to people. While the intelligence of smart devices form the skeleton of the entire IoT-framework, advanced storage and data processing platforms like the cloud, help keep the framework thriving. Although the embedded intelligence in smart devices like self-driving cars, intelligent manufacturing floors promises of a future with increased levels automation and smart interaction, it does not stop there. It also makes way for a next-era technological renaissance that aims to penetrate into areas like autonomous driving and the fourth industrial revolution. However, in all its glorification, there is a caveat for the IoT-sector to boom: IoT fatigue

How do we define IoT fatigue?

People around the globe are taking to smart sensors and embedded intelligence to monitor their biological stats, optimize their lifestyle habits and even schedule the daily errands. Restaurants and shopping-stores around the world are using cameras and data to improve customer experience in a real-time set up. Production chains are employing smart machines that can interact with each other on the floor and mitigate any losses in the process and improve the efficiency. The underlying concept behind all these ‘connected environments’ is the Internet of Things. While a lot of these solutions are built with an intention to make life easier, many others are often seen as redundant or ‘too much too soon’.

While the world is going all in on the technology, a lot of recent commentary can crush the IoT hype bubble. This technological wave that leads one to think if IoT is too hyped up with too little substance, is IoT fatigue. Although, the debate on IoT being over-hyped or underestimated is on, it is necessary we chalk the future opportunity of IoT out. It is not the individual nodes in the network that matter. However, the structure which integrate these nodes can provide the concept with its substance. A judicious exploitation of these connections can be leveraged to form a solid business model. It is vital that technologists understand the factors contributing to the slow death of IoT as a concept, before jumping to probable solutions.

What is leading us to IoT fatigue?

A lot of social media conversation on IoT’s scope highlight the gap between its perception and the reality. We all know all connected devices generate huge amounts of data. While there are technologies to handle the size and variety of data, it is getting intimidating for the consumers in the domain. Security and instability in the future are major concerns that pushes most people to question the viability of IoT. Furthermore, consumers are getting weary of giants like Amazon and Google tracking all their sentiments and actions. This leads them to worry about hackers gaining unwanted access to devices they use for their privacy and safety like, baby monitors and smart locks. A 2015 HP report on Internet of things highlighted how 90% of devices collected atleast one piece of personal information via the device, the cloud, or its mobile application.

The rate at which integration of devices and people is increasing, it is inevitable that the concept of one centralized storage and processing unit, i.e. the cloud will soon become redundant. The smart objects are tending towards a new framework based on decentralization of IoT application logic between platforms and the connected nodes. This is because objects such as robots, intelligent cars and smart machines are being designed to enable autonomous operations inbuilt IoT application logic. Hence, it is only reasonable to have the logic and supporting framework distributed across various smart objects and the cloud. This decentralization does not only sound intimidating but also looks like the growing network may not be manageable.

There is more to IoT fatigue

In addition to the above, it is also evident that IoT is not a bankable-industry to invest in. With the vast scope laid out in the definition of the concept, not a lot of companies are sure about how to develop their muscle in it. The design and usability of the connected devices are another addition to the list of reason IoT may be on a path of being infamous. Ignoring ‘user experience’ and how feasible human-to-machine interaction is, can be one of the biggest blunders in IoT-development. The fastest growing technology device-trend, wearables is contributing to the development of IoT. While all of us are currently taking the latest trend up, it will most likely cause a davice fatigue soon.

A bullish Morgan Stanley report, expects a 1 billion “bull case forecast for wearable-shipments in 2020.” Additionally, while the ideas for smart-devices are on a rise, the underlying semiconductor technology needs to keep up with the development-pace too. Constantly increasing the computational efficiency of the electronics while scaling the size down reducing power and memory requirements is a constant challenge faced by the manufacturers.

However, all the above facts only lead to a fallacy that IoT is only an act of pervasive data collection and the intelligent computation of the data so collected. On the other hand, a great part of IoT’s business value in the near future will be in the use of smart objects with embedded intelligence to offer sophisticated actuation capabilities.

How do we prevent IoT fatigue?

IoT fatigue is not inevitable, but only if one can align its development to the best choice of the civilization which will be consuming it. It is necessary that one understands the end-users’ persona and their operational environment before developing a product for them. To learn what their desired outcome is; what their capacity of information is; what use they make of the data or insight is of utmost importance while developing an IoT solution.

Since the crux of the concept of IoT is integrating everything, it would not make sense to have broken connections. Creating a design for a comprehensive set of scenarios can help eliminate redundancies is how a person can use an IoT solution. Representing the complete framework of all processes in any scenario enables the consumers to leverage valuable data across systems to deliver maximum value at minimal costs. In addition to the above, automating all low-risk tasks can prevent IoT fatigue in the long run. Software solutions can now, ensure that the automated decision or action is exactly what a human-user would have chosen under similar circumstances.

However, there might be situations where users are not comfortable with the plain decisions taken in an automated manner. In such scenarios, it is best to provide them with the most viable form of processes information that will enable them to take more informed decisions. For instance, if your smart-home system detects a plumbing leak in the basement and if there is a failure in the automated action to shut the appropriate valve down, it calls for immediate human intervention. Although a simple alarm sent for the water leak and an alarm for the valve failure to a maintenance dashboard can make the task simpler, providing a higher order analytical information will be more useful for the users to solve the actual problem.

IoT is evolving, and so are all the auxiliary technologies that come along. With the advancement and growth foreseen, it is evident that increased levels of automation and intelligent connections shall obviate the need for error-prone human actions. That might bring along a fear of technological singularity or negligible privacy, but the solution is not to shun the growth, instead mold it to our benefit.