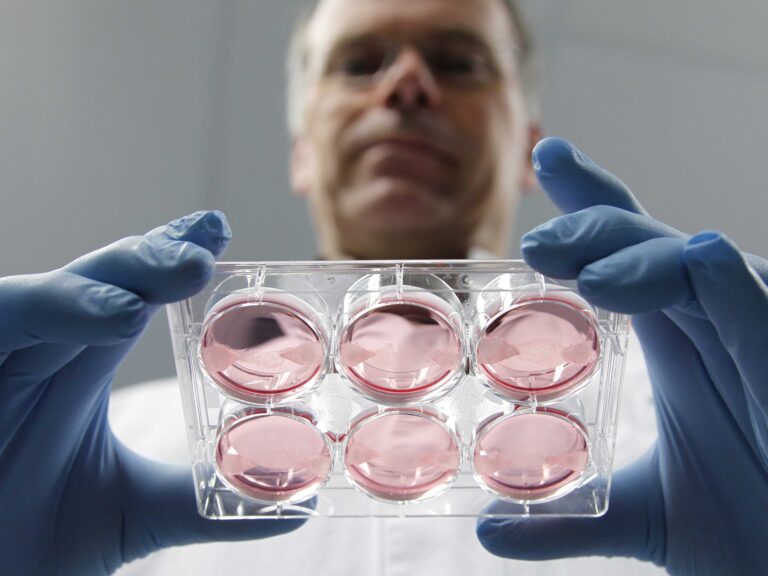 Would You Eat Lab Grown Meat?

Is synthetic meat on your menu?

One of the greatest debates amongst the millennials is not a political, religious or scientific one, yet it brings all of these into its fold. It is the dispute of vegetarianism with the non-vegetarianism with a little side tiff wit vegan philosophy. And it is a multi-fold conversation, involving everything from ethics, nutritional value to cultural differences. And the end of this battle is not in sight.

What we seem to forget time and again is the power of food. It doesn’t matter which type of meal revs up your taste buds. Whether plant-based or sourced from animals, food has a lot of jobs to do. Food nourishes, maintains and helps us grow. It comforts and excites. And it heals. Worse, it could harm us.

And that is why the food industry is learning as it grows.

The Hunger for Innovation

Some of the greatest research conducted across the globe is focused on our meals. From agricultural advancements for yield increase, fortification of grains that give a boost of nutrients to the malnourished, to evolving methods of animal husbandry; all the while working on ways to make it more sustainable and less arduous on our environment. There have also been some unusual requests (like NASA promoting the need to be able to one day provide all vital nutrients to their space-borne crew in the form of a tablet).

The need to reinvent the food industry has thus led to another kind of development – lab-grown food. With the advent of tissue culture and better understanding of stem cells, there has been a leap to an atypical idea – creating meat in a lab.  There have been efforts in this regard since the 80s at least. In fact, Way back in the 30s, Winston Churchill had proposed, “We shall escape the absurdity of growing a whole chicken in order to eat the breast or wing, by growing these parts separately under a suitable medium.” And that is, basically, how it is done. Increasingly, young investors and animal welfare groups have started coming out in favor of this.

This Cultured Beef could help solve the coming food crisis and combat climate change, and would cost some 250,000 euros.

Many laboratories across the world are working on this. Several have even created strips or sheets of such in-vitro meat (known as shmeat – sheet of meat in some circles).

Some were able to get together pieces large enough for one-time consumption as seen in a London press conference in 2013. Here, a team of scientists led by Mark Post of the Maastricht University (Netherlands) presented a burger, with a lab grown beef patty. It was cooked by a reputed chef and tasted by a few eminent food critics. It was rated average, better than a soy alternative but without the taste of the real deal because of lack of ‘fat’. It was basically a mass of muscles.

These staggeringly expensive schemata had been the result of years of hard work and research, funded for by an anonymous donor. Later it was revealed that the €250,000 had been provided for by Sergey Bring – Google’s CEO!

From stem cells to your plate

The beef patty that was used in the London conference had been on a long journey. Stem cells were derived from a cow’s muscle tissue. Stem cells are the wondrous state of cells which can divide and differentiate into almost any cell type of the host. It is possible to source them from embryos or adults. For muscle tissue production, satellite cells are also viable.

The stem cells were then housed with nutrients and growth-promoting factors that resulted in millions of stem cells in about 20 days. These were then divided in smaller dishes and placed under tension to make them come together into muscle strips. Such strips were joined to make that beef portion. Since meat has other components like fat tissues, work is on to simulate a ‘real’ piece of meat. 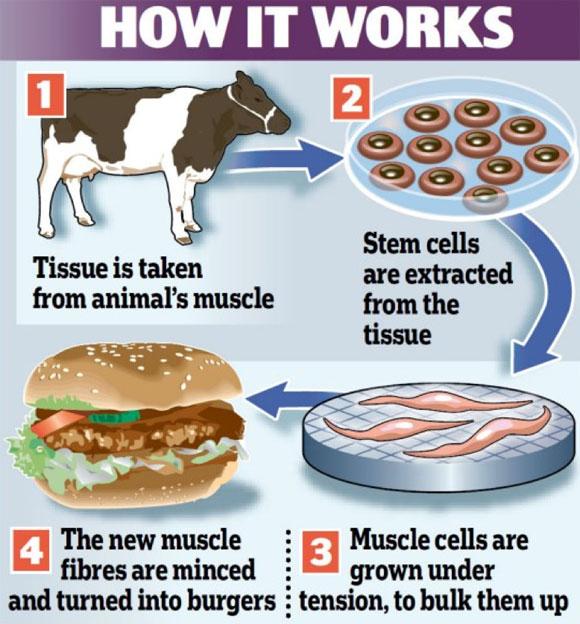 Alongside the meat revolution is another one taking off with much less noise. Eggs! Globally the consumption of unfertilized eggs has taken off, with only a small amount of fertilized eggs in the market. But in order to combat the resource strain of grain feed, water and transportation, a lot of companies with plant-based alternatives have cropped up. Enter-G Ink, Bob’s Red Mill and several others are already on this path with powders that replace egg’s use in baking and others. These companies are now investing in research to simulate the scrambled eggs and boiled eggs’ texture in plant-based alternatives. Their hope is to be able to relieve the huge economical and environmental stress of poultry on the Earth and also to do away with food allergies and incidences of disease outbreaks that ‘real’ eggs possess.

Mosa Meat, New Harvest and Beyond Meat are some of the emerging players in this new market of in-vitro meat. Advocates of lab-grown meat have been promoting it as the environment friendly future food. Some of its ‘pros’ are listed here –

Sustainability:  Jason Matheny of the New Harvest organization says that during his stay in India, he realized the pull towards large-scale meat production even in a place that he thought was prevalently vegetarian. He then realized that across the world, meat consumption had increased with increasing incomes and globalization. UN’s Food and Agricultural Organization estimates that nearly 20% of the global carbon-footprint is due to livestock and its byproducts (Recent work by independent body Goodland and Anhang puts this number at a staggering 51%). It is expected that by 2040, meat consumption will double. So will these problems. And so will the huge strain on our resources – natural as well as economic.

But to expect people to stop consuming meat may be a little absurd. It is a matter of personal choice and cultural and social upbringing. In such a scenario, it becomes necessary to look for alternatives. And lab grown meat with its less land and water requirement may be the answer. Also, the waste production is minimal.

Ethical Implications: The argument of ethics has been central to the in-vitro meat production. This, after all, is what vegetarians and animal welfare societies all over the worlds argue most vehemently on. Generally, animals are reared, nurtured and allowed to grow before killing it and then most of the body parts are not even used. In the in-vitro technique, this process is bypassed and is therefore considered less ‘hurtful’. 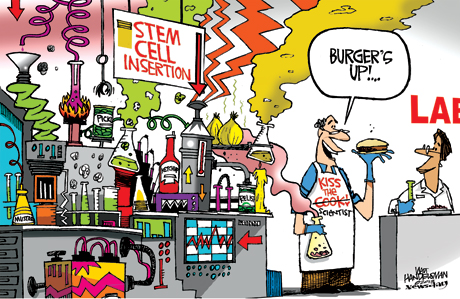 Health benefits: Many health problems like avian and swine flu have origin in unsanitary pens and slaughter houses. The risk of such outbreaks and other exposures to pesticides and microbes is minimal in sterile lab conditions. The content ratio of fat to protein is also subject to change; therefore it may prevent healthier variants. Moreover, with more developments, it may be possible to fortify the meat with omega-4 fatty acids.

Economic Constraints: There has been a great push for research in this field in order to meet growing food demand while reducing environmental burden. It was claimed that if conditions are ideal, 10 pork muscle cells could result in 50,000 tons of meat, in about 2 months. For other types of meat, too, the estimates are humbling. But all this is possible only when it becomes large-scale. Currently, this method drains loads of energy. A lot of investment is requires in order to make it viable in the future. According to some, even with technological advancements, a realistic approach tells us that it will still be considerably expensive than traditional meat for at least a decade after hitting the market.

Consumer Reluctance: The idea of eating something grown in a lab seems abhorrent to many. Most of the people say that meat consumption is not only about the muscle but the related fat, connective tissue and bones which add to the taste and texture. As of now, this is missing in lab-grown meat. Also, in some communities, hunting is still a part of their eating habits and there seems to be reluctance to do away with it completely. Until the cultures meat becomes nearly similar to the traditional one, it will be hard to expect people to shell out money in its favor. Some believe that such ‘unnatural’ product may expose them to yet unknown diseases.

The Methodology: Many question the ethical problems associated with this technique. It is potentially harmless to animals. The stem cells required are few and can be procured harmlessly. But the nutrient medium provided to help them grow contains Bovine Serum (Bovine = of the cow) as do most of the nutrient mediums in most of the techniques globally. Moreover this bovine serum is generally derived from calf fetus.

Is it ethical to do this? One way to overcome this is using nutrient-rich cyanobacteria or photosynthetic algae or plant derivatives, instead of bovine serum. They may reduce the cost of production too. But such changes in protocol have to be done properly, keeping in mind related allergies and diseases. Till then it will be hard to envision this lab-grown meat as a clean, ethical and healthy product. 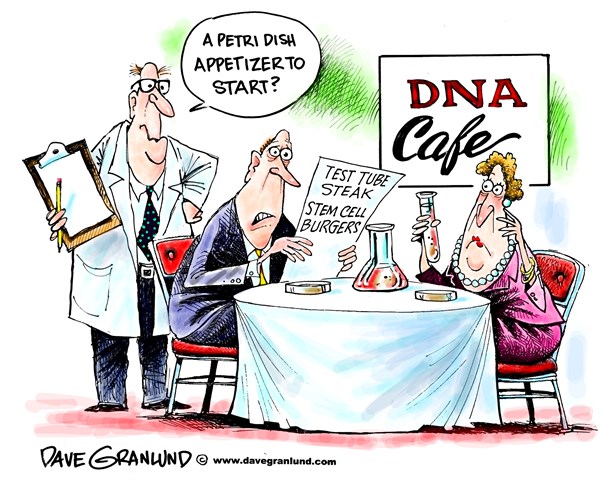 We have come a long way from foraging bushes and hunting to survive. Today food is a part of our cultural fabric as much as our biological needs.

If you think long and hard, some of our consumption habits are weird. We are the only mammals to consume milk of another! We deliberately ferment items to enhance their culinary appeal (cheese and wine are just a few examples)! We even inoculate milk with bacteria to create yogurt!

Maybe lab-grown meat (and eggs) won’t be an aberration and may even become viable and popular. Are we then moving to an era where we might be soon ordering petri-dish meals?