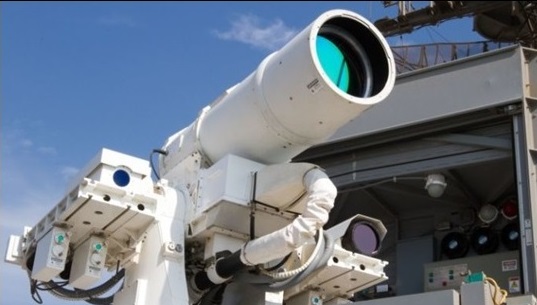 The Laser Weapon Hype is real!

Can light be lethal?

When you think of light, apart from the whole association with optics, the scientifically minded are likely to think of it as a “source of energy”. And while light is of course, as essential to life as anything else, a focused beam of light could turn out to be lethal. We’re talking about laser of course.

To understand how light can be turned into a weapon, consider an incandescent light bulb, and a flashlight. A light bulb sends out light waves consisting of peaks and troughs in all directions. Different frequencies of waves combine together to give white light. A flashlight sends out waves of light focused in a single direction, depending on where it is pointed.

A laser beam behaves in a similar fashion. The difference, is that in a laser, the waves belong to a single frequency, with peaks and troughs being synchronized. According to HowStuffWorks, the light produced by a laser is almost 1000 to 1 million times stronger than a light bulb.

It isn’t surprising then, that there have been attempts to weaponise this. Many governments, such as those of the United States of America, Russia, and the United Kingdom are now actively investing in laser weaponry. While they remain tight-lipped about their work, the US Navy has been working on it with full force. In fact, according to the Defence-Aerospace archive, it has invested almost $40 million dollars over the past 6 years into research, development, and testing of laser weapons. The US Air Force has developed three laser weapon systems, namely – Airborne Laser, PHaSR, and Active Denial system.  The

The AN/SEQ-3 laser weapon system or XN-1 LaWS is a directed-energy weapon developed by the US Navy. Its power can be controlled and hence can be scaled from a low-power mode capable of dazzling a person’s eye, to a high power (upto 30 thousand KW) mode, capable of causing immense destruction. When targeting small boats, it can burn sensors and motors, and can even detonate explosive material. Against helicopters, it can target vital components and bring them crashing down. Although these weapons can be used for destroying objects , the Geneva convention prohibits their direct use against humans, especially in the case where the weapons can cause blindness.  Some systems, such as the Active Denial System, have been designed to attack humans, but only to an extent that the target may feel a mild yet painful burning sensation.

Laser weapons have many advantages over traditional ones. The conventional gun rounds and missiles cost thousands of dollars per shot. Whereas in a directed energy weapon, each shot can be fired for as little less than one dollar! The light output from the laser travels at the velocity of light, hence is not visible to the naked eye; its effects observed only when the target is struck, which is another important advantage. On further development, laser weapons may replace medium calibre artillery and short-range air defense missiles, as well as all line of sight weapons used by the military.

The future of Laser Weapons

As high profile lasers failed to live up to their expectations in the past, the topic of laser weaponry has received little public attention, as many thought that there are no realistic prospects for them. Little does the world know, various government entities are hard at work.