In recent years, we have come across a lot of terms related to the environment. Pollution, global warming and ozone layer depletion are just a few to name. But one of the problems which directly affects us is the Global Energy Crisis.

Energy is a broad term that includes fuel sources as well as power. Among fuel sources, costs are skyrocketing at an alarming rate. Oil prices are rising rapidly. The price of coal has doubled. Power cuts in several developing nations are rampant, leading to riots. While on the other hand, rich countries are worrying about the energy supply. In the developing world, 1.6 billion people have no access to electricity.

Although we do hear a lot about alternative energy sources, they aren’t properly implemented in most cases. The main cause is the inability to provide 100% efficiency in their usage.

Japan Has An Answer

Japan has come up with an idea that might seem to rectify this problem.

Shimizu, a Japanese architectural and engineering firm, has a resolution for the climate crisis. They propose to build a collection of solar panels about 400 km wide over the Moon’s equator and use it to reflect the sunlight (in the form of carbon free energy) to the Earth. A receiving station on the Earth’s surface will then convert the reflected beam to electricity.

In a way, it follows the very same principle of solar power generation, the only difference being in the fact that the energy of the sun is received as a result of reflection. 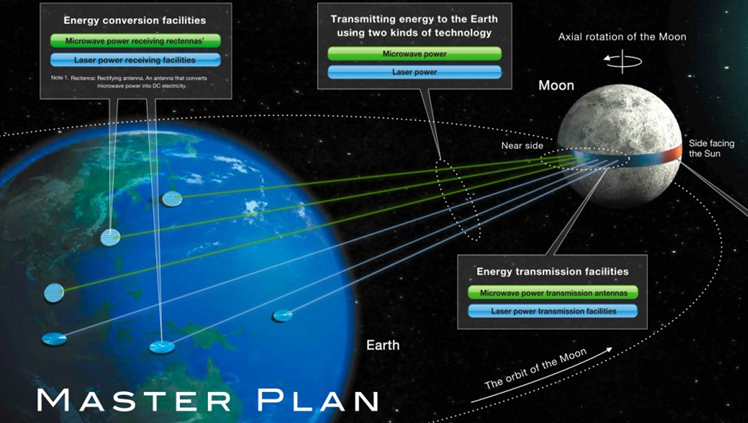 But to achieve this plan, a separate plant would have to be set up on the surface of the moon. Solar panels on such a huge scale are not implemented practically; therefore factories will have to be set up to help in the production of solar panels which span over many kilometres. This is undoubtedly a behemoth task.

Shimizu justifies its stance by stating that robots may be used for jobs on the lunar surface, thereby reducing the dependency on human labour in outer space. The main tasks at hand will be mainly levelling the surface of the moon for placing the solar panels and excavation of hard bottom strata. The company proposes to start off on the Luna Ring project in 2035.

Although prima facie, this plan does seem ludicrous and out of the world (quite literally!), not mentioning exorbitantly expensive, this is not the first time that such a plan was formulated. Back in 2009, a Los Angeles based startup company – Solaren – proposed to build an orbiting solar power plant in space. In fact, it was approved by the California regulators.

This plan would include a photovoltaic energy harvesting farm on the moon. Solaren aimed at working on the principle of concentrating the energy of the sun through a lens – not dissimilar to the basic science experiment of holding a magnifying glass under direct sunlight to burn paper.

The plan proposed the creation of an inflatable Mylar mirror on the moon’s surface, spanning over a kilometre. The sun rays would be reflected from this inflatable mirror onto a smaller mirror, which would then concentrate the sun rays and project it as a beam towards high efficiency solar panels on the Earth’s surface. Power generation stations on the Earth – specifically the ground station near Fresno, California – would then generate electricity from the solar beam.

The Advantage of Orbiting Energy Sources:

[quote_left] Orbiting panels can generate energy round the clock [/quote_left]

One thing is very clear from these examples: These methods utilise the basic technologies used to generate solar energy and implement this concept on a massive level. Unlike terrestrial solar power plants, orbiting solar panels can generate energy round the clock, thereby resulting in more generation of electricity. For the earth systems to generate that amount of energy, help from conventional fossil fuels is needed, which would inevitably nullify the advantages that the method was trying to achieve in the first place.

However, that being said, the cost of lifting the solar panels into orbit would be far higher than for building a photovoltaic power plant on earth.

To conclude, having orbiting energy collectors might just do the trick in solving the world energy crisis. The main hurdles that arise are the cost of putting such machinery in outer space, and also the Outer space law, which is difficult to apply.

But then again, you never know. In the next 50 years, maybe this will be realised. We can only wait and watch till then!

How Many Gigafactories Do We Need To Power The Entire Planet?

A Brief History Of Life

How Long Does a Crisis Last?