On 28th October 2016, Elon Musk drew apart curtains to unveil Solar Roof, an ambitious joint venture from Tesla Inc. and (its now-subsidiary) SolarCity. Tesla, a well-known name in the automotive field, is all set to revolutionise the field of green technology with this new innovation.

What are Solar Roofs?

Solar panels aren’t by any way a stranger to the energy market. But the novelty of Tesla’s solar roof lies in its integration of photovoltaic cells (A.K.A solar cells that translate solar energy into electric energy) with roof tiles. Simply put, they aren’t roofs with tiles. They are the roof.

The panels are similar in size and appearance to standard tiles and can seamlessly replace the existing drab-looking roof tiles completely. Tesla began accepting orders for the solar roofs from in April 2017. They are likely to adorn homes before the end of 2017.

Though information has been disclosed sparingly, Tesla claims they check all the boxes for an ideal solar panel: performance, durability, low cost, safety, aesthetics and warranties.  Each shingle is padded with highly efficient photovoltaic cells. Then, a coloured film is set down overhead. A tempered glass that acts as a guard against extreme weathers superimposes it. Panasonic in partnership with Tesla Inc. manufacture these tiles.

At the outset, they look identical to normal shingles. But the roofs allow the sunlight to pass through the built-in solar cells for generation of electricity.

Also Read: Elon Musk’s Neuralink Will Usher In The First Generation of Superhumans

Tesla’s product significantly challenges traditional roofs. You can now harvest your own solar energy, in slick style. Tesla claims they’ll operate at 98% efficiency of regular panels. They can outlast the typical 20-year lifespan of normal roofs and save power bills over the same time period.

Interestingly, the solar roofs are seen as Tesla’s way of garnering quick bucks and carrying out the halo effect. Customers of a product from one brand are said to become customers of its other products as well. The Halo effect therefore essentially establishes brand loyalty. Tesla will help itself to some of that by targeting its die-hard modern-tech fans and thrifty homeowners who are looking for ways of cutting back on the power bills and having their own immediate source of energy. It brings down the cost of installation by combining the separate processes of installing non-solar roofs and solar panels into one fluid process. A win-win situation for both Tesla and the customers.

A potential source of energy and remedy for Global Warming

Fossil fuels are expected to be used to go extinct by the early 22nd century. Hasn’t it been high time we as a human race prepare for an alternate source of energy. Additionally, it is also necessary to counterattack the current huge menace threatening the existence of life on earth – global warming. Turning to sustainable sources of energy like the solar reduces the carbon dioxide emissions.

Powerwall 2 and Powerpack storage batteries, connected to Solar Roofs can store the surplus energy during daytime. In late hours, electrical appliances will use this stored energy. With these working in tandem, a four bedroom apartment, Musk claims, can be powered for a full day.

Tesla’s tiles are in fact, more resistant than the normal roofing materials like terracotta, clay and slate tiles. Musk demonstrated the toughness and the impact resistance of the glass used by dropping a kettlebell on the terra-Cota, Glass Tile, Slate Tile and Tesla Glass Tile. Only the last withstood the force.

Also Read: Solar vs Nuclear – What energy future are we headed for?

Challenges of these solar shingles mainly stem from its dressing and cost.

Concentrating on its composition, it has drawn critical remarks from scientists all over the world. Rodrigo Ferrão de Paiva-Martins is a Portugal material scientist’s expertise lies in thin-film solar cells. He claims that shingles with inbuilt solar cells are inherently less efficient than conventional solar panels. He remarks that the regular solar panels can deliver about 3 to 4 percent more conversion efficiency than Solar Roofs. Therefore, he claims that the former should be less costly at about the 10-percent-efficiency margin.  Second, Angèle Reinders, an engineer at the University of Twente in Netherlands, works on the integration of photovoltaics into infrastructure. She asserts that glass would not be strong enough to insulate the inner materials from extreme climatic conditions.

A Noob’s Guide to CRISPR

These shingles despite housing the solar cells look indistinguishable from a normal roof. This is achieved by the addition of colour to the film placed over the solar cells. This tint thwarts the absorption of sunlight from several angles, diminishing its efficiency. Particularly, this hurdle only heightens the plight as on cloudy or humid days, the light from the sun will bounce off objects like clouds before reaching the roofs.

A pre-requisite is the optimal position of the houses which will enable the PVs to get direct and higher sun exposure. Not all houses are poised to be eligible candidates for the solar roofs. Some houses might not be angled right for direct sun exposure.

Adding to the criticism surrounding cost, CEO of rival solar power provider SunPower Corp Tom Werner has reportedly thrown shades on Tesla’s claim of offering solar roof at a rate lower than typical roofs. Though there is no official pronouncement of price to date, consumer reports have turned in the estimate to be close to $60,000. This only means that Solar Roofs are open only to those who have the luxury of deciding the designs and materials in the construction of homes. Installing Solar Roofs in lieu of the old regular shingles would end up giving the customers lengthy bills. In Tesla’s defence, these roofs will last longer than the normal asphalt shingles which normally last between 10-15 years.

With a promise that it will cost lower than a traditional roof, it is hard to calibrate the close going price of these solar shingles. Still, only the top 1%-5% might be able to afford because of its use of expensive quartz glass. More financing options might scale up the rate of affordability and expansion.

The solar roof may not be a transformative innovation. There is sufficient competition that they would face in the market. This is because Solar shingles aren’t new to the market. Companies including Dow, CertainTeed, SunTegra Solar Roof Systems, Atlantis Energy Systems etc. are popular suppliers of solar shingles. They, similar to Solar Roof, use building-integrated photovoltaics (BIPV) which incorporate solar cells into infrastructure. Therefore, it all boils down to the cost and performance of Solar Roofs which would set them apart from its competitors.

Amidst all the furore about this new innovation, the clamour of failure stories is unavoidable.  In fact, there are no success stories with regards to solar panels. Previously, the solar panel manufacturer Solyndra suffered the fate of bankruptcy and a permanent shutdown in 2011. Only time will tell if Tesla can break this jinx.

Yet, factoring into the dialogue the prospect of energy savings and lesser or no utility bills, homeowners will decidedly go for these state-of-the-art roofs.

An immediate contradiction that comes to mind is how a cold country like America (the immediate target market for Tesla) would harness the best out of these solar roofs. That takes one to the urban legend of solar panels in general not working to maximum output in cold conditions. In reality, solar cells work their best in low temperatures. With increased conductivity in cold weather, electricity flows more fluidly and efficiently. They produce lesser energy at higher temperatures. Yet, Tesla claims they’ll deliver consistently high energy even at higher temperatures. Only overcast weather and shorter daylight hours would relatively reduce the production of energy.

Also Read: The Fight To Own The Stratosphere: Google’s Project Loon vs Facebook’s Aquila 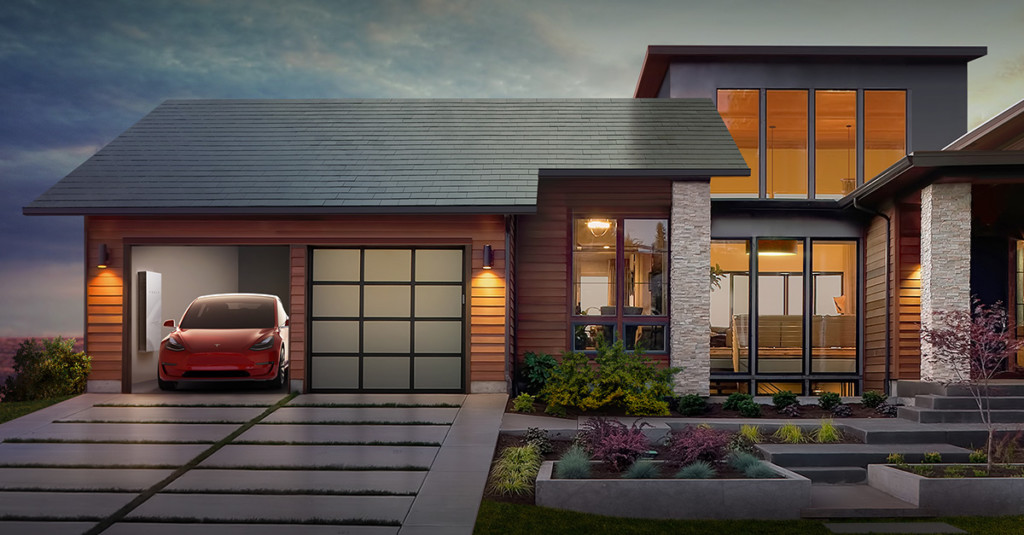 The Sun supposedly provides sufficient energy in one hour to cover the planet’s consumption for one year. Solar Roofs harness this free, abundant energy to the max with its highly efficient solar cells. Solar roofs, Powerwall, prospective solar Tesla vehicles together represent the new kind of Holy Trinity in energy tech. Tesla’s intention of making its products a revenue generator than a cost generator is evident and appreciable. It kills three birds with one stone by achieving a technical improvement, an aesthetic addition and an ecological enhancement.

Double-assuredly, a spawn of sleek and modern solar vehicles will take over the market soon. It would be interesting to see if these futuristic ventures would withstand the test of practicality.

How Many Gigafactories Do We Need To Power The Entire Planet?